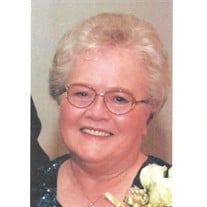 Zelma Darlene Baxley was born February 25, 1940, in Abilene, Texas. She passed from this earthly life at home in Hurst, Texas, surrounded by her loving husband and four children. She is survived by her loving and devoted husband of 62 years, Bud, her four children and their wives, Buddy and Kathy Baxley of Grand Prairie, Walt and Lisa Baxley of Hurst, Kathy and Paul Gause of North Richland Hills, and Steven and Ivana Baxley of Haslet. She is also survived by her seven grandchildren: Joshua Gause of Ft. Worth, Sarah and Shawn Eversole of Hurst, Clayton Baxley of Hurst, David and Sarah Gause of North Richland Hills, Anna and Ben Donnell of Ft. Worth, Adela Baxley of Haslet, and Samuel Baxley, also of Haslet. She also leaves seven great-grandchildren: Caden, Allison, Hailey, Bricen, Andrew, Riley, and Maddie, as well as one on the way who will never have the joy of having known her. Darlene, as she was called her entire life, was the daughter of Walter Cled and Sarah Zelma Berry. At the age of 8, she and her family moved to Ft. Worth where her father worked for Convair. She was baptized and devoted her entire life to Christ at the age of 11. When she was 13, her father was transferred to Convair in San Diego, California. During her Senior year of high school, she met the love of her life, Bud, who was stationed in San Diego as a Marine. They were married on March 28, 1958, and enjoyed 62 years together as husband and wife. Darlene was the epitome of a Christian woman. She put her God first, her husband second, and her children above herself. Even though Bud served in the Marines in Okinawa, the Philippines, Japan, and then Viet Nam in battle, she served on the home front, bravely and courageously raising and caring for their four children. She endured hardships of making many moves during Bud’s 22 years in the military. However, through it all, she taught her children her faith in God Almighty and to love and serve Him all the days of their lives here on earth. Before they were married, she taught Bud what it meant to be a Christian and he, too, was baptized. She was indeed a homemaker her entire life. She was always there for her children, her grandchildren, and, until the dementia completely overtook her, her great- grandchildren. She taught her daughter Kathy how to be a good Christian wife and mother, how to sew, and her love of genealogy. She adored her grandchildren and cared for them while their mothers had to work, so that they never had to spend a day in daycare. For a few short years, she even cared for her great-grandchildren until her health and mind would not allow it. In the last year of her life, she couldn’t remember who her great-grandchildren were, but she loved playing Barbies, baby dolls, and the game, Hungry-Hungry- Hippo with Maddie. She also loved to play Yahtzee with her grandchildren and then later her great-grandchildren. She loved for Allison to brush and fix her hair and play Uno with her. She leaves behind many great memories and a legacy to be proud of. Her family and friends are rejoicing at her going home to her Creator but will greatly miss her presence here on earth.

Zelma Darlene Baxley was born February 25, 1940, in Abilene, Texas. She passed from this earthly life at home in Hurst, Texas, surrounded by her loving husband and four children. She is survived by her loving and devoted husband of 62 years,... View Obituary & Service Information

The family of Zelma Darlene Baxley created this Life Tributes page to make it easy to share your memories.