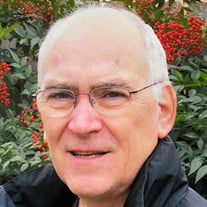 Zdenek Josef Jary passed away peacefully at home on November 6, 2021 after a long illness. Zdenek (known as “Z”) was born March 29, 1947 in Prague, former Czechoslovakia, to parents Jan and Jana Jary. In 1970 he emigrated to the United States after living in Vienna for a year, having left Prague after the Soviet invasion of 1968. He landed in New York City and eventually found employment at United Nations, and later American Airlines, in the field of accounting. In 1979 he transferred to the DFW area with American Airlines. Later in his career he was employed by Half Price Books at their corporate headquarters in Dallas as their database manager. There he enjoyed his work and the people he worked with so much that he waited until age 70 to retire. Zdenek was a devoted husband, father and grandfather. He loved being active and pursued many athletic activities throughout his life including soccer, biking, inline skating, speed skating, downhill skiing, running, wind surfing and glider plane flights. He loved airplanes and was working toward his private pilot’s license but a move to Sydney, Australia for two years curtailed his training. When he turned 50 he celebrated by sky-diving (a surprise gift from his wife and daughter). Turning 60, he celebrated by biking 60 miles. Z was an accomplished photographer throughout his life, having taken up the hobby as a teenager in Prague. The family has many cherished photographs because of Z’s expertise and dedication to his craft. Later in life he created a You Tube channel of photo collections that he compiled into presentations set to music, with themes including older family photos of relatives in Prague, family outings and get togethers, and some of Z’s favorite photos throughout his 50+ years of photography. In all he posted over 35 presentations for his family to cherish and return to watch many times. He is survived by wife Elaine, daughter Dominique Marquez and her husband Erick Marquez, grandchildren Sebastian and Sophia, brother Jan Jary and his wife Barbara Jary, niece Lydia Zitoon and her husband Shadi Zitoon, grand nephew Titus Allal, nephew Ian Jary and his wife Heather Jary, grand nephew Jensen Jary, as well as former wife Marie Jary, stepson Thomas Winton and his wife Sherrie, step grandchild Jonah Winton, stepson D. J. Perkins and his wife Shannon Perkins, and step grandchild Cash. The family is planning a Celebration of Life tribute to Zdenek to honor his memory.

The family of Zdenek Josef Jary created this Life Tributes page to make it easy to share your memories.

Zdenek Josef Jary passed away peacefully at home on November...

Send flowers to the Jary family.