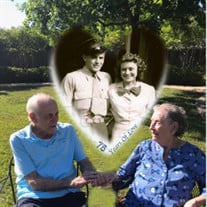 William Eugene (Gene) Roach was born October 10, 1924 in Johnston City, Illinois and departed this life on December 31, 2020 in Bedford, Texas. Gene was the son of Raymond and Ruth Wilson Roach. Gene lived with his parents and nine siblings until he turned 17 years old. He moved to Chicago and lived with his brother Harold while seeking work. The great depression was winding down as the nation moved to a war economy and work in the big cities was flourishing. Shortly after he moved to Chicago, the US entered the war (WWII). Gene, knowing that he would be needed as part of the war effort, enlisted in the Marine Corps. He served honorably in the Marines seeing combat in the South Pacific. Following his time in the Marines, Gene returned to Chicago, where he met Dorothy Tidwell while attending church. Soon they were ready to marry and start a family. They lived in the Chicago area, raising their three children there. Gene worked for Southland Corporation’s Wanzer Dairy. He rose through the ranks from a retail delivery driver to become the executive manager of dairy operations. In 1987, Gene retired. He had enough of Chicago’s rough winters, so he and Dorothy moved to Mount Pleasant, Texas where they could enjoy a slower pace and warmer climate. That “slower pace” kept him busy participating in the creation of the Titus County Hospice program, where he served as executive director. He and Dorothy were Hospice volunteers for over twenty years. He also served as the chairman of the Titus County Habitat for Humanity, helping to build many homes for the underprivileged. Gene was also very active in his local church where he taught Sunday school for many years. Gene loved to garden, growing vegetables that he would share with his neighbors. He was also an avid fisherman, spending many hours fishing the lakes around Mount Pleasant. In 2011, as Dorothy’s health deteriorated, they decided it would be wise to move closer to their children who lived in the DFW area, so they bought a home in Bedford where they lived comfortably near two of their children and many grandchildren. In mid 2017, they moved into an assisted living facility in Bedford where they remained until Gene’s passing. Dorothy continues to live there. Gene was preceded in death by his parents, Raymond and Ruth Wilson Roach. Six of his siblings are also deceased: Geraldine Roach, Evelyn Fowler, Harold Roach, Mildred Hendershot, Vera Dodd and Betty Taylor. Gene is survived by his wife of seventy-six years, Dorothy Tidwell Roach; three children: Saundra (Lee Roy) Burns, Michael (Linda) Roach, and Ruth (Dan Caliendo) Donahue; six grandchildren, thirteen great-grandchildren, and seven great-great-grandchildren; three sisters: Dorothy Joselyn, Lynda Tidwell and Frances JoAnne Tidwell; and one brother, Lowell Roach. Gene’s remains will be interred at the Dallas Fort Worth National Cemetery at a time yet to be determined. In lieu of flowers the family ask donations be made to either, Habitat for Humanity or Cypress Basin Hospice in Mount Pleasant, Texas. “On Saturday, January 9, 2021 at 11:00 a.m. a Video Stream of Gene's Celebration of Life will be viewable here https://video.ibm.com/channel/23847896/video/ji3t03

William Eugene (Gene) Roach was born October 10, 1924 in Johnston City, Illinois and departed this life on December 31, 2020 in Bedford, Texas. Gene was the son of Raymond and Ruth Wilson Roach. Gene lived with his parents and nine siblings... View Obituary & Service Information