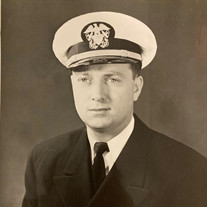 William Clair Metzger Jr. of Roanoke TX, passed away on April 8, 2022, at the age of 93 from a long battle with Parkinson’s. He was predeceased by his father William Clair Metzger Sr., and his mother Pauline Metzger and his Son Chris Metzger. He was blessed with a very large and loving family. His precious wife of 33 years, Aida L Metzger, his wonderful son Bill Metzger the III, and Stepdaughter Jeanette S. Simmons. All who love him and endeared him with the requested name, Clair. His family name also carries on with Bill Metzger the IV, his grandson, alongside his precious wife Holly Metzger. Inclusive are his great grandchildren. William Metzger the V, Parker Metzger, Anderson Metzger and sweet Everly Metzger. Surviving also are, Christian H. Martin, Abigail E. Martin, and Anneliese A. Martin, his step grandchildren whom he very much loved, leaving them with his legacy of a kind and gentle heart, a willingness to learn, and the love for the beat of jazz music. Inclusive are River Bleu Perez, and Estelle Avery Perez, his well-beloved step great grandchildren, who also had the opportunity to sit on his lap and go for pleasant walks. He is also survived by his beloved younger sister, Bonna Aven alongside her husband Carl Aven. Nieces: Kelly Aven Oberg, Paula Aven Allen, Leigh Ann Aven stewart, Carla Aven Breakwell, Julie Aven, Laura Aven, nephew, Jimmy Aven and their individual families, all who love him and endeared him, with his memorable name, Bill. William was born on January 29, 1929, in, Minneapolis Minnesota. The rest of his accomplishments and summary of his life, I will write in his words as he wrote for himself in the late 1990’s. “After completing 9th grade at Ramsey J.H.S., I attended St. Thomas Military Academy in St Paul. Discipline was what I needed, and it was swift and effective. I Studied pr-med at St. Thomas College. Under the guidance of Dr. Leonard Lang, I observed many children born. I was ready to quit school when a priest talked me into a seminary. So, I spent three years at St. John’s Univ. in St. Cloud, MN. I truly loved this school. Later, it became clear to me that I should leave. To escape the draft, I enlisted in the Navy and was sent to Officer Candidate School in New port, RI. I was stationed in San Diego on an admiral’s staff, then boarded the USS Helena, a cruiser, for the Western Pacific. I somehow was promoted to lieutenant. One day after returning to Mpls. In 1955, I trained in a Piggly Wiggly store, in Sioux Falls, SD. Then I supervised stores throughout the Dakotas while living in Fargo. After a year I moved to Singer Island near Palm Beach in Florida and opened a small chain of Piggly Wiggly stores. At the age of 31, I married Peggy Pearson. We have two sons: Billy III and Chris. I have a 14-year-old Grandson, Billy VI and a 5-year-old grandson Christian Martin, (today he is 28) who is of my Stepdaughter Jeanette, whom I love dearly by my second marriage to Aida from Chile. In the meantime, in 1960 my father and I organized a chain of convenience stores which I named Pik-Quick. Later we called them Li’l General. When we had 450 stores, we sold to General Host Corp. Now they are part of Circle K. At the age of 35, I had a close encounter with a malignant melanoma. A radical change took place. I moved my family to Los Angeles, then I began to earn an MBA at the Univ. of So. Cal. I was well compensated by the school with scholarship, fellowship, etc. While at USC I worked as a Vice-Pres. Of Tele- Research. We tested TV commercials and I was a marketing consultant with Dr. Ward Jenssen. Later, I spent six months working for Fed-Mart stores based in San Diego. Sol Price later started Price Club. When I left the rat-race, my family agreed to our developing a nursery school and kindergarten. We did this for eight years. During this time, I served on the Board of the San Diego Schools Pre-school program. I was teaching in four of the community colleges in the evening. After selling our stores in Florida and the school, we retired to live in Sequoia National Park in a lovely home…I became a backpacker. In 1978, a drastic change of life occurred, and I lived in Fresno to be near my sons. Then I lived in Maui for two years and met Aida, who is my wife, best friend, and partner. I finally discovered that I am a teacher. I love it and still teach classes in Escondido Ca. for Oasis. (past) Except for an injured knee, I have been healthy. Chorale singing, reading and tennis are my pastimes. Last year I won a bronze medal in the world Senior Games in Me’s 65 singles. Several years ago, my partner and I won the tennis men’s doubles, age 55, gold medal. I really treasure my friends. Memories of you are important to me. Because life is “iffy”, now” Only he could summarize his life the best and would have wanted this displayed. William received the Lord Jesus as his Lord and Savior later in his life, and the Lord planted him at Gateway Church, where he was discipled and served on the volunteer team alongside his wife Aida. He made many friends and enjoyed the fellowship with Gateway Church family. God Bless you Clair. A “Celebration of Life & Memorial Service” will be held on Tuesday April 26, 2022, starting at 10:00 am, at Lucas Funeral Home in Keller, 1601 S. Main St. Keller, TX. 76248. (817)753-6800. A light reception will follow at same location. Memorial services will be held at the National Cemetery in Dallas. 2000 Mountain Creek Parkway, Dallas, TX 75211. (214)467-3374.

William Clair Metzger Jr. of Roanoke TX, passed away on April 8, 2022, at the age of 93 from a long battle with Parkinson&#8217;s. He was predeceased by his father William Clair Metzger Sr., and his mother Pauline Metzger and his Son Chris Metzger.... View Obituary & Service Information

Send flowers to the Metzger family.