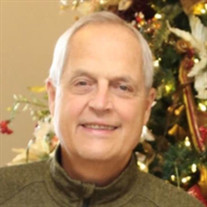 William Edward May Jr. passed away December 2, 2021 at his home in Colleyville, Texas after suffering from many health issues related to the exposure of Agent Orange while serving in the military in Viet Nam. Bill was born July 26, 1948 to the late William May Sr. and Jean Gebhardt May of Fort Atkinson, WI. He married Gloria Gruennert in July 1971 in Fort Atkinson, WI and they have one daughter, Abigail Novara (Michael), Birmingham, MI and three wonderful grandchildren: Ava Christina, Juliana Sofia, and Dominic Michael Anthony. Bill is survived by siblings Mary Mikalson (Danny Fairman), Waterloo, WI; Martha Kutz (Gerald), Bradenton FL; Sarah Orendorff (William), Bradenton FL; Jennifer Zavadil (Richard), Bradenton, FL. and Peter May, Bradenton FL as well as several nieces and nephews. Bill is preceded in death by sister, Ruthann May and nephew, Zane Zavadil. Bill grew up in Fort Atkinson, WI and went to St. Paul's Lutheran School through 8th grade then transferred to Fort Atkinson Senior High School, graduating in 1966. He entered the Army in 1967 and served for four years. After his basic training in Ft. Lewis, Washington Bill shipped out to Viet Nam in the Infantry division and proudly served for two tours in Viet Nam. While there he earned several medals, badges and commendations including the Purple Heart. When he returned to the United States he completed his military duty at Fort Sheridan, Illinois. Upon being honorably discharged from the Army, Bill enrolled at the University of Wisconsin-Whitewater and while there he served as a ROTC leader. When he graduated, he received a Business major with an Economics minor. With his business degree he embarked on a varied career in Finance at General Motors, Janesville, WI; worked on Wall Street in New York, NY; RayOVac, Madison, WI; Clarison Industries and Certified Grocers in Ocala, FL; Spartan Stores, Grand Rapids, MI; Nash Finch Co., Edina, MN, GAP-Old Navy in Hopewell Junction, NY and San Francisco, CA; Flemming Co. Lewisville, TX and Tween (Justice Inc.) and Victoria's Secret in New Albany, OH. Bill and Gloria moved several times over the course of their 50+years together and had great opportunities with each job. Each move they were fortunate to meet many wonderful people, and lived in many equally extraordinary cities. Anyone who knew Bill realized what a great Patriot he was and how much he loved our Country. He had a variety of interests: one could find him enjoying an early morning round of golf: Lake Okeechobee, FL for fishing trips sometimes even fishing in tournaments: Mt. Carmel, Illinois for gun school; volunteering at Haltom City Rifle & Pistol Club in Haltom City, TX as a Range Officer; or watching any sport on TV - especially following his beloved Wisconsin Badgers (there was nothing better than college football in his mind). He loved his sports cars, motorcycles and lived a full life. He was very proud of his family and all his friends heard many stories about his 3 grandchildren, even though some never met them, they knew everything about the grandkids. When Bill was a Kindergartener, his teacher wrote on his report card, "Billy can tell a good story", and that held true throughout his life. He was such a voracious reader and great writer. He had hoped to pen his own memoir but the sands in the hour glass ran out. With all his life experiences, it would have been a successful read. One last interest or love that Bill had was his passion for "big dogs'. Over Bill and Gloria's married years, they had many big dogs. Cleveland (St. Bernard), Ollie & Chloe (Old English Sheep dogs), Maggie (Great Pyrenees), and the breed they truly loved was the Newfoundland. Wini, Lucy, Phoebe, Ripley & Bailey brought so much love and joy to Bill and each one was truly treasured by him. A Thank You goes to the special Team at Encompass Health Hospice. Their dedication, compassion and kindness shown to Bill was very much appreciated. Lucas Funeral Home, Hurst, TX handled cremation arrangements. Interment will be at Arlington National Cemetery with military honors for Bill in the months to follow. If you wish, a memorial contribution can be made directly to the following military organizations: K9s for Warriors, 114 Camp K9 Rd, Ponte Vedra, FL 32081 904-686-1956; Tunnels to Tower, 2361 Hyland Blvd., Staten Island, NY 10306 718-987-1931 or to Wounded Warriors, PO Box 758517, Topeka KS 66675 877-832-6997.

William Edward May Jr. passed away December 2, 2021 at his home in Colleyville, Texas after suffering from many health issues related to the exposure of Agent Orange while serving in the military in Viet Nam. Bill was born July 26, 1948 to the... View Obituary & Service Information

The family of William Edward May Jr. created this Life Tributes page to make it easy to share your memories.

Send flowers to the May family.