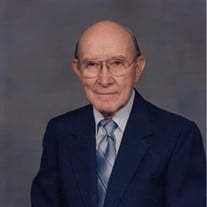 William (Bill) John Burns was promoted to his eternal reward on Sunday, July 25, 2021 at the Texas Health Harris Methodist Hurst-Euless-Bedford Hospital in Bedford, Texas. Born on December 10, 1925 to Bill and Lona Burns in Olustee, Oklahoma, he was the third of six children. In 1950, he put his employment with Phillips Petroleum in Phillips, Texas on hold to join the United States Navy and serve for four years as a pipefitter on the USS LST-1122 during the Korean War. After being honorably discharged in 1954, he moved back to Phillips, Texas to work again at the Phillips refinery and soon afterwards found the love of his life, Elizabeth Conklin. In 1955, they married and moved to what would become their hometown for the next 36 years, West Columbia, Texas. Shortly after retiring from Phillips, Bill and Elizabeth moved to Mansfield and then later to North Richland Hills, Texas. Bill’s love for Christ was first and foremost in his life. He loved his family. He is preceded in death by his wife of 61 ½ years. He is survived by a son and daughter-in-law, Billy and Vickie Burns; a daughter and son-in-law, Ruth and Bruce Clark, 5 grandchildren, Jason, Michael, and Aaron Burns and Amanda and Matthew Clark; and 6 great-grandchildren, Joey, Gavin, Ella, Ben, Will, and Anna Burns. He is also survived by his sisters, Oleta Walker, Wilma Sadberry, and Genell Foltz.

The family of William John Burns created this Life Tributes page to make it easy to share your memories.

William (Bill) John Burns was promoted to his eternal reward...

Send flowers to the Burns family.