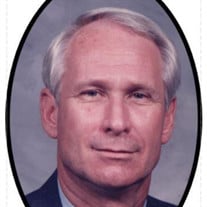 William “Bill” Green Adams, Jr. was born on December 7, 1936 in Waco, Texas to the late William Green Adams and Alice Caroline (Scott) Adams. He passed away on Monday, November 22, 2021 in Colleyville, Texas. He was a 1955 graduate of Waco High School. He also graduated from Baylor University where later he served on the Marketing Advisory Board. He retired from General Foods after 36 years of dedicated service. He then started and ran a home building business, Legend Custom Homes. Bill was an active member of Cross City Church in Euless where he served as a deacon and trustee. Mr. Adams really enjoyed spending his time with his family who will miss him dearly. He was preceded in death by his parents; his beloved wife of over 63 years, Jo Reita (Wakefield) Adams; sisters, Frances Frazo and Virginia Harris. Bill is survived by his daughters, Tracy Adams of Colleyville, TX and Terry Fonner and husband, Dave of Canyon Lake, TX; son, Bill G. Adams, III and wife, Martha of Houston, TX; grandchildren, Amanda Moody and husband, Joel, Adam Fonner, Zachary Adams; and nephew Scott Wakefield of Brooklyn, New York. Funeral service will be held at 10:30 A.M., Friday, December 3, 2021 at Cross City Church in Euless with graveside following at 2:00 P.M. at Oakwood Cemetery in Waco, Texas with John Meador officiating. Arrangements are under the direction of Lucas Funeral Home in Hurst.

The family of William "Bill" Green Adams Jr. created this Life Tributes page to make it easy to share your memories.

Send flowers to the Adams family.