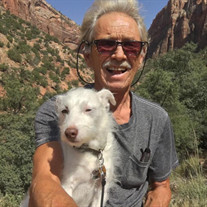 Walter G. Wood, 67, passed away June 15 th , 2022. He was born August 4, 1954, in Chester, Pennsylvania, the son of Mildred (McGhee) O’Hara. Walter, or “Woody” to his friends, served his country in the United States Air Force from 1974-1983 as an Air Cargo Specialist/Instructor, attaining the rank of Staff Sergeant. In 1987 he graduated from Midwestern State University with a Double Major in Accounting and Business Administration. He was a Certified Public Accountant for over 25 years. Walter had a long and distinguished career in Finance, working for Tarrant County and the City of Fort Worth, TX for 15 years. He retired from the City of Stephenville, TX as the Director of Finance in 2017. When not busy watching NASCAR, Woody spent his free time traveling the country, visiting National Parks and monuments with his faithful and beloved pal Riley by his side. He was a loyal Eagles Fan and John Wayne enthusiast. He had a passion for music and was an “audiophile” long before the phrase became vogue. Woody was a member of the VFW Post 7835 of Granbury, TX where he spent most Thursday nights shooting pool and drinking beer with his fellow patriots. Walter was preceded in death by his mother Mildred and grandmother, Sarah McGhee; Two brothers, William McGhee and Chester McGhee of Wilmington, DE. He is survived by Two Daughters, Sara (Wood) Dygert and her husband Robert; of Fort Worth, TX; Texanna (Wood) Rice and her husband Jason of Newark, TX; Three grandchildren, Emily, Samantha, and Lily; One brother, Norman McGhee and his wife Robin, of Wilmington, DE; Two sisters, Joanne (McGhee) Harris and her husband Frank of Bear, DE, Kim (Wood) Teti and her husband John of North Star, DE. He also has many nieces, nephews, and friends whom he loved dearly. In honor of his wishes, no formal service will be convened, and his ashes will be scattered at a place of his choosing. He will be receiving a plaque for his military service at the National Cemetery in Arlington, TX. “Life is getting up one more time than you’ve been knocked down.” ~John Wayne

The family of Walter Gerald Wood created this Life Tributes page to make it easy to share your memories.

Send flowers to the Wood family.