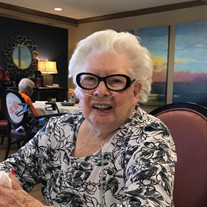 Vivian Anaya April 24, 2026 - October 1, 2021 Keller, Texas - Vivian Anaya, (1926-2021), was born in Wasburn, Missouri on April 24, 1926, the daughter of George Elvin Oakley and Edna Elizabeth Dawson. Vivian passed away on October 01, 2021, at Baylor Scott and White hospital in Grapevine, Texas. On August 28, 1943, during World War II Vivian started a lifelong civil service career as a clerk typist, at Tinker Air Force Base in Oklahoma. Shortly after she volunteered for a position at the Pentagon in a newly formed department of Casualty Affairs, taking her to Washington D.C. This department was established by the famous 5 Star General Henry H. Arnold (Hap). Vivian's lifelong civil career took her to Perrin AFB, in Texas, Okinawa Japan and Wilford Hall, in San Antonio, Texas. She retired after 35 years of service from Wilford Hall where she was the secretary to the administrator. Here Vivian was given the title "Ms. Wilford Hall. They referred to her as the "Red Headed Wonder" Her outstanding performance was recognized by Eight (8) Superior Performance Awards, an Air Training Command Civilian Commendation award and an Outstanding Service Award. Having spent years devoted to her Country's service and her husband, Air Force Pilot, Alfred Anaya (1920-1997), Vivian's other great joy was raising their daughter Vicki and her devotion to her Husband. Vivian was a lot of things, to a lot of people. She was a loving sister to her nine siblings and a wonderful Mother and Grandmother. She was very generous to all people. Her strength and dignity were contagious. Vivian was a loyal and faithful friend, she was a devoted member of the First Baptist Church in Keller, Texas. Survivors include: her Daughter Vicki Renda, of Southlake, Texas,her sister Allene Patterson of Washburn, Missouri, three grandchildren, and four great grandchildren. Funeral services will be held at First Baptist Church in Keller, Texas on Friday, October 8th at 11:00 a.m.

The family of Vivian Anaya created this Life Tributes page to make it easy to share your memories.

Send flowers to the Anaya family.