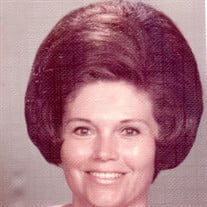 VIRGINIA BALLEW HOBBS Affectionately know to many as “Nana”, or “Sue” was born to Denver Sam Ballew, and Bula Mae Francis Cunningham on August 6, 1936, Denton County, Texas, in the East room of her grandparents farm known as the “Cunningham Homeplace”. In 1948 Virginia moved to Grapevine, Texas with her parents. She attended Grapevine Schools until she graduated in 1954. She was voted “Best All Round” in her senior year and played “Irene Burgess” in the senior play “Curtain Going Up” . Virginia went to work at the Palace Theatre downtown Grapevine, there she met Tony Hobbs and they married in 1954. Tony and Virginia had 4 children Harold Hobbs, Shirley Hobbs, David Hobbs, and Cindy Hobbs Griffin. They moved to Bedford, Texas in 1962 that is where she lived for 59 years. Virginia worked at Lockheed Martin in Irving, Texas for 20 years, then Bell Helicopter Textron in Hurst, Texas for 20 years retiring in 2005. Virginia had a simple code of ethics-- love of God, Family, and Friends. “Sue” was a kind soul her compassion was immeasurable. She loved and respected people for who they are with no judgement. Her love for any form of life human or animal was huge! She lost her battle with Congestive Heart failure on June 6, 2021 surrounded by a lot of love. She was preceded in death by her father Denver Sam Ballew, her mother Bula Ballew, brother Denver F Ballew, and sister Carolyn Ann Ballew. Virginia’s Grand children include Cory Spencer, Colby Spencer, Tyler Hobbs, Tony Hobbs and wife Jewel. Great Grand children include Jackson Lee Spencer, Addyson Hobbs, and Harrison Hobbs. Niece’s Beverly Ballew Miller, Beth Ballew Morphew, and Nephew Bradley Ballew. Special extended family members include Tammy Leatham, Brandon Leatham, Kathy Hobbs, Darrell White and wife Denise, Lois Dudley and husband James, Eddie and Diana Reyes, and Savannah Schillings. She left behind a very lovable faithful dog “Izzy” ….PS she will be cared for by family. Special “shout out” to Custom Care Hospice team for caring for “Sue” in her last days. Nursing Staff was excellent! In lieu of flowers the family requests donations in her name go to SPCA of North Texas.

The family of Virginia Ballew Hobbs created this Life Tributes page to make it easy to share your memories.

Affectionately know to many as “Nana”,...

Send flowers to the Hobbs family.