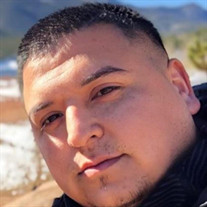 Vinsent Antonio Hernandez, 32, passed away on Thursday, February 11, 2021. Vinsent was the youngest of two sons born to Irasema Tafoya and Roland Hernandez on December 15, 1988, in Dallas Texas. ​Growing up in North Richland Hills, Texas, Vinsent, spent those carefree childhood days hanging out with his brother and neighborhood friends. Vinsent attended Birdville Highschool graduating class of 2007, a proud moment for his parents. ​If you ask anyone who knows Vinsent they will tell you, Vinsent never met a stranger in his life, talked to everyone, helped everyone, loved everyone. Which meant he had many long time friends from elementary to present day. He took life with a smile everyday. You just couldn’t help but love him, his laughter and smiles were so contagious and warming. ​Determined to be the best he could be, Vinsent seized every opportunity that was presented to him. Vinsent worked for his dream job Ben E. Keith where he started as a store stocker in 2013, to having his own route 887, skipping merchandising position into sales. It was the perfect position for him. He loved interacting with people. ​Being born and raised in the DFW area it is obvious that Vinsent’s favorite sports team would be the Dallas Cowboys. The love of the team was in his blood. Through highs and lows he was a loyal fan. A highlight for him was a time he was able to attend a Cowboys game that fell on his birthday and watched the game from the stadium suites. In 2010 he became father of his first born Gabriel A. Hernandez, his pride and joy. Vinsent always looked up to doing the things he did as a child with his first born son. In 2012 Vinsent met Catherine Valerino, whom he feel in love with and spent 9 loving years together. They had a daughter Ava G. Hernandez together in 2015, who he called his princess. ​Of all his accomplishments, Vinsent was the proudest of his children. He always did his best to be the father they deserved. His love for them was unconditional. He was a hands-on dad. Attending his son’s football games and his daughter’s soccer games. Cheering them both on from the sidelines, his heart swelling with pride. Vinsent was extremely proud of his wife and children and relished the time he was able to spend with them and would do anything to make them happy. He treasured spending family time at the lake, fishing, grilling, and enjoying their company. ​If there is one piece of wisdom that Vinsent would give you it would be that “Family is everything”. Vinsent did his best to live his life that way. Gone to soon from this life Vinsent is survived by his beloved wife Catherine Valerino; son, Gabriel A. Hernandez; his daughter, Ava G. Hernandez; his mother, Irasema Tafoya; his father, Roland Hernandez; his brother Rick Hernandez; and family and friends. A visitation will be held from 6:00 P.M. to 8:00 P.M., Friday, February 19, 2021 at Lucas Funeral Home Chapel in Hurst, Texas.

The family of Vinsent Antonio Hernandez created this Life Tributes page to make it easy to share your memories.

Send flowers to the Hernandez family.