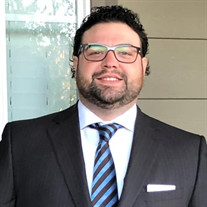 Victor “Guy” Renda was called home on Saturday, November 20, 2021 to spend eternity with his Lord and Savior, Jesus Christ with his wife and daughter at his side. Funeral service will be at 1:00 on Monday, November 29, at 1:00 pm at The Bowden in Keller, TX. Burial will follow at Westlake Cemetery. Celebration of Life will be from 4-7:30 pm at Calabrese in Southlake, TX. Guy was born on January 29, 1989 in Fort Worth, TX into the loving arms of Vicki and Oscar Renda. He grew up as the youngest of three in Keller, TX and attended Keller High School. His family home in Stagecoach Hills was very near and dear to Guy’s heart. The neighborhood has a grass runway which allowed him to be surrounded by airplanes, one of his greatest passions. Guy was so proud to be the grandson of a WWII bomber pilot, and he would tell you that he had his grandmother take him and his friends to every airshow possible when they were young. His love for airplanes and flying led him to obtaining his pilot’s license before he had his driver’s license; something that gave him such pride. Later he owned Tina’s Pilot Shop at Northwest Regional Airport and loved to sit outside of the hangar and watch airplanes take off and land. Guy was incredibly proud of his Italian heritage. He was blessed to attend a year of middle school in his father’s hometown of Monte Filone in Southern Italy. There he learned to speak fluent Italian and cherished the time that he spent with his Italian family and all of the locals. As with everyone that Guy got to know, the local people loved Guy and he remains a favorite to this day. To know Guy, was to love Guy. His radiant personality and energy along with his determination to enjoy every day of his life to the fullest left no option but for people to love him and want to be around him. Almost everyone of Guy’s friends would tell you that he is their best friend. He was also so kind, tender-hearted, and always very generous. Guy loved to do it all from playing the guitar, flying airplanes, riding dirt bikes, drag racing, wakeboarding, racing UTVs, but the most joy he had was watching his precious son follow in his footsteps. He had a bond with Rush that can’t be put into words. They are so much alike, and Guy loved that they had so many similar interests and talents as Rush got a little older. Guy was the best father who always made sure Rush was happy and having fun. Rush will definitely carry on the adventurous spirit of his Daddy that he loves so very much. Guy was always on the go and didn’t take any day for granted. He met and then married the love of his life, Sarah Renda, in 2018 and became a stepfather to her son and daughter, who he loved as his own. The two things that Guy loved the most were his family and Jesus Christ. When he and Sarah blended their families, Guy would tell you that he finally had his own family and that is all that he ever truly wanted. He adored his wife and children and cherished all of the memories the 5 of them created together. The light Guy brought into this world will never be extinguished. He will live on in the heart of so many. May his steadfast faith and close relationship with Jesus Christ comfort us as we know that he is present with the Lord. Guy was preceded in death by his maternal grandparents, Alfred and Vivian Anaya as well as his paternal grandparents, Francesco and Filomena Renda. Survivors include his wife, Sarah Renda; children, Rush Renda, Sydney Cantrell-Renda all of Argyle and Logan Cantrell of Fort Worth; mother, Vicki Renda of Southlake; father, Oscar Renda and wife Raquel of Dallas; sister, Natalie Renda-Lorant and husband Michael Lorant; brother, Frank Renda and wife Amanda and his niece and nephews Dominic Renda, Madison Renda, and Santino Renda all of Southlake and half-brothers Rocco Renda and Enzo Renda of Dallas. In lieu of donations, the family requests that flowers be sent to the service at The Bowden, 1775 Keller Parkway, Keller, Texas 76248.

The family of Victor "Guy" Renda created this Life Tributes page to make it easy to share your memories.

Send flowers to the Renda family.