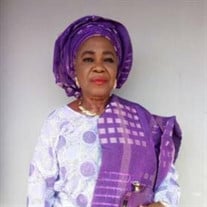 LATE PRINCESS VERONICA OGHOGHO EGBENOMA (NÉE OKUNSERI) aka BIG MUMMY. Late Princess Veronica Oghogho Egbenoma was born in Benin city, Edo State on the 29th day of March 1948 to the family of Late chief Lawrence Asiruwa Okunseri from Ohga village in Ovia North- East Local Government Area and Late Madam Janet Amenaghanwon Okunseri Née Emovon from Usen/Urhionigbe village in Orhionmwon Local Government Area both in Edo State. Her father had 36 children, 12 boys and 24 girls and she was the second child but first girl. Due to her father’s love for education, she attended primary school and later proceeded to Edokpolor Grammar school where she made her Waec with flying colours in November 1969. During her stay in secondary school, due to her academic performance and moral discipline, she was made a school prefect, secretary to the cultural dance group, treasurer to the young farmers club and also an honorary member of the geographical society. Big Mummy’s love for educating children made her take up her first teaching appointment at Ugha primary school , Ugha in present day Uhunmwonde Local Government Area in the early 70’s, this passion she temporarily left when she got married to the love of her life, Retired Squadron Leader Godwin .I. Egbenoma(rtd) from Ibiebi village in Orhionmwon Local Government Area on the 25th of May 1973 in Benin City and moved to Lagos,together they are blessed with four adorable children, Mrs Joy U. Egbenoma Osakwe, Sir Charles E Egbenoma, Mr Osagie.E.Egbenoma, Mrs Isoken.B.Egharevba. Due to the transfer of her husband as a military officer, Big Mummy traveled the length and breath of Nigeria doing business, on her return to Benin in 1981, she continued with her passion by teaching at Gaius Obaseki Nursery / Primary school, Dawson road, this she did for some years before taking up an appointment as an insurance broker with the then British- American insurance company in the mid 80’s, towards late 80’s Big Mummy decided to be an independent business woman and she ventured into the sales of logs and sawn woods, this she did for a very long time until she retired and spent her life living in the warmth and comfort of her children and siblings' love. Big Mummy was a devoted and loving mother who in spite of all odds, gave her best in raising her children to the envy of their peers and she absolutely adored her grand children. She loved music, dancing and was a proud and active member of the Christian mothers society, St Jude De Thaddeus society and also a second generation member of the Benin Social Circle, she always did her best in every little way to put a smile on the face of everyone who came across her, No wonder everyone calls her BIG MUMMY. Mama O Mama will fondly be remembered as a lover of peace, a dedicated Christian, a devoted catholic, a disciplinarian, fun loving Grand Mom, caring and loving mother of her children, supportive and loving sister, mother of the people, always smiling, friendly and always there for the family. She will be sorely missed by all, sleep well mummy till resurrection morning. Adieu Big Mummy. Family Tributes: Tribute to Veronica Egbenoma from the first Grandson: What can I say about my grandma besides the fact that she was caring, kind, loving and overall an understanding person who had so much love to give not just her family but to other people around her. No matter what happens or how she felt she always fried to put her kids and grandkids first which was one of the many things I love about her, my only regret was that I wasn’t able to see her one last time but knowing the type of person she was just hearing my voice and knowing I’m doing well both physically and academically meant the world to her and miss her so much so all I will do in her honour is to celebrate her life and what a wonderful role model she was. I will forever miss her daily. Tribute from Veronica Egbenoma first son: Tribute to my beloved mother A beautiful vessel through which I came to be in this sinful world filled with cruelty & pain, yet you showed and gave me love, comfort & hope. Thank you for single handedly raising my siblings and I to face the challenges of this world, for you have raised me up to be a man, a giant,an epitome of respect among my peers. You gave everyone around you hope and encourage all to surpass their limitations, you were a roll model, a character builder,a devoted Christain, a steadfast catholic, a community leader, a love giver, a mother to all who knew you, No wonder everyone calls you Big Mummy and am proud to be your son. Rest on my Hero, my African Queen and more so my beloved Mother. Iyeniye, Iyesogie. -Sir Egbenoma Charles Enoma (KSJI) Don Tribute from Veronica Egbenoma son-in-law: Mummy, you were loved by all because of the beautiful impression you left in the hearts of all who had the opportunity of knowing you. I am one of them. I will always remember your charming smile. Mummy, we love you but God loves you more. Sleep on in the Lord, till we meet and part no more. -Christopher Osakwe (Son-in-law)

The family of Veronica Egbenoma created this Life Tributes page to make it easy to share your memories.

Send flowers to the Egbenoma family.