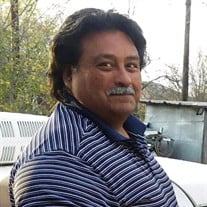 Tony Lee Ybañez, age 57, of Roanoke, Texas, went home to be with the Lord on Wednesday, September 8, 2021. He was reunited with his mother, Juanita, brother, Leonel Jr., and grandmother, Maria Sanchez. Tony was a loving husband, father, true friend, and loved his children and grandchildren more than anything. He was a strong man with a big heart, who never met a stranger. He was funny, quirky, generous, and always giving help to everyone. Tony and his wife, Rebecca, went everywhere and did everything together, side by side. Tony was many things to many people and he will forever be a legend to those that knew him. He leaves behind a legacy of love, humor, honesty, and humility. He was an amazing guy that will never be replaced, making the world a little emptier without him. Most of his career he was a welder for Mesco Metal Company, with the last 15 years driving trucks for the Wheat Lumber Company. Tony was born on August 17, 1964, in Corpus Christi, Texas. As a child he lived in Alice and Irving, Texas before moving to Roanoke, Texas, where he met and married Rebecca on August 28, 1982. Tony loved working on classic cars with Rebecca and making different kinds of projects, fixing stuff, and tinkering with what he found interesting. He loved spending time outdoors, and talking with family, grandchildren, friends, and co-workers. Tony is survived by his wife, Rebecca; son, Anthony Ybañez; daughter, April Velasquez, her husband, Evan Velasquez; grandsons, Nikolai Velasquez, Malakai Velasquez; granddaughter, Sarai Velasquez; father, Leo and Shirlene Ybañez; brother, Johnny and ErciliaYbañez; sisters, Diana Ibañez, partner, Derrick Wynans, Raynalda and Rob Casteel; and many nieces and nephews.

Tony Lee Ybañez, age 57, of Roanoke, Texas, went home to be with the Lord on Wednesday, September 8, 2021. He was reunited with his mother, Juanita, brother, Leonel Jr., and grandmother, Maria Sanchez. Tony was a loving husband, father, true... View Obituary & Service Information

The family of Tony Lee Ybañez created this Life Tributes page to make it easy to share your memories.

Send flowers to the Ybañez family.