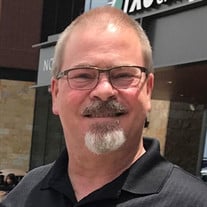 Todd Byron LaRue passed suddenly at his home on Saturday, February 12, 2022 at the age of 56. Todd was born in Huntsville, Alabama on January 6, 1966 to Phyllis Thomas and Ivan “Lash” LaRue. Todd lived life on his own terms, causing a whirlwind of light-hearted chaos everywhere he went. Todd, despite his rebellious side, was someone anyone in his life could rely on. Todd loved hard, laughed often, and lived selflessly. He was an amazing son, brother, friend, colleague, husband, and father. Todd spent the last 20 years devoted to his family and his work in aviation. He took lots of time out of his days putting others first, working on their cars and helping out wherever else needed. Todd was a very charismatic man, accumulating a wealth of friends that have stuck by him, respected him, and will truly miss him. The days he didn’t spend working he enjoyed watching Formula 1 racing, grilling, and hanging out with the family and friends that he loved. Todd Byron LaRue is survived by his wife, Angela Sparks LaRue; children, Paige, Braedon, and Dylan LaRue; mother, Phyllis Thomas; siblings, Damon Scott LaRue (Melissa), Tom LaRue (Tiffini), and Dani LaRue; and many other family members, friends, and co-workers. Todd is preceded in death by his father Ivan “Lash” LaRue and father-in-law Carl Sparks.

The family of Todd LaRue created this Life Tributes page to make it easy to share your memories.

Send flowers to the LaRue family.