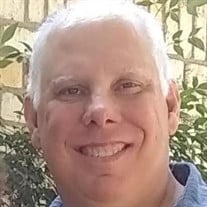 Tim Gene Stevens, 57, of Bedford, Texas passed away on Thursday, March 18, 2021 in Bedford, Texas due to Covid-19. Tim was born on December 25, 1963 in Lubbock, Texas to Tommie & Lynda Stevens . He married Alisa Ennis in Las Vegas on January 7, 1994. Tim went on to obtain an Associate’s Degree from Tarrant County College. In the Air Force he obtained Air Force Training Ribbon, Air Force Good Conduct Medal, Air Force Outstanding Unit Award. Tim worked at America Airlines for 20 years as a mechanic, fleet service clerk, and slide shop. Tim also had Big Bear Lawn Service where he created and ran his own business for three years and was a Security Director at North East Mall for ten years. Tim’s favorite activity was anything involving his children. He was a very hand’s on and involved father and took great pride in his children. He loved his kids more than anything. Tim attended Suzuki lessons, was a Boy Scout assistant leader, fill-in soccer coach, and high school homecoming float driver. He cheered his son while playing football and cheered his daughter while she cheered on the cheer squad. He would cry tears of joy each time he watched his children perform orchestra concerts. Best Dad doesn’t even begin to describe Tim’s commitment to his children. Tim’s favorite hobby was using his smoker to make the most amazing BBQ you have ever tasted. His other favorite hobby was watching NASCAR. He would typically be watching NASCAR while he smoked meat in the backyard. Tim is survived by his wife, Alisa Stevens; daughter, Savanna Stevens; and son, Owen Stevens; sibling, Jim Stevens, and wife, Kathy; nieces, Amber Clay, Abbey Hatton, and Amanda Hahn; and nephew, Aaron Stevens. He is also survived by his pet, Daisy Grace. He is preceded in death by his sisters, Kathyrn Diane Stevens, and Keila Kay Hensley. A Celebration of Life Service will be held on April 10, 2021, at 10:00 am at First Baptist Church of Hurst. A Reception with light refreshments will take place following the service. Tim and Alisa believe deeply in dog rescue. As an expression of sympathy, memorial contributions may be sent to Be My Forever Home (bemyforeverhome.org) which is where Tim and Alisa rescued their current dog Daisy or memorials can be made to the Fort Worth Humane Society (www.hsnt.org/donate) where they rescued Clarabell and Patches. “So with you: Now is your time of grief, but I will see you again and you will rejoice, and not one will take away your joy.” John 16:22

Tim Gene Stevens, 57, of Bedford, Texas passed away on Thursday, March 18, 2021 in Bedford, Texas due to Covid-19. Tim was born on December 25, 1963 in Lubbock, Texas to Tommie & Lynda Stevens . He married Alisa Ennis in Las Vegas on January... View Obituary & Service Information

The family of Tim Gene Stevens created this Life Tributes page to make it easy to share your memories.

Tim Gene Stevens, 57, of Bedford, Texas passed away on Thursday,...

Send flowers to the Stevens family.