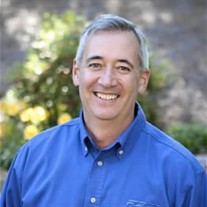 Tom “Divot” Smith passed peacefully into the hands of our Lord on March 23, 2015 after a courageous battle with brain cancer. Tom was an incredible husband, father, son, friend and fighter pilot brother. He left our lives far too early but for those of us who had the chance to know Tom, we are much richer for it. Tom was born to Ray and Paula Smith on September 30, 1963 in Levelland, Texas. As the son of an F-4 fighter pilot and grandson of a World War II B-26 pilot, Tom had military aviation in his blood. He graduated from the University of Nevada, Reno with a BS in Finance and received his Air Force commission from Officer Training School in 1988. He also earned a Masters in Aeronautical Science from Embry-Riddle Aeronautical University in 2000. Tom met Mitzi Jo Bell of Sparks, Nevada and to pardon the pun, the “spark” between the two was instantaneous. They were married December 17, 1988 and went on to have two fine children, Maddison Deen and Carson James. Tom was an up and coming Air Force officer and following a brief stint as an F-111 weapon systems officer, he graduated from pilot training #1 in his class and earned an F-16 position. Flying the F-16 took the Smiths around the world, including assignments in Germany and South Korea. Tom was a born leader with the very rare quality of being able to encourage people to get the job done while simultaneously having fun doing it. He had an infectious sense of humor and people gravitated to him, knowing happiness would soon follow. The Air Force recognized these qualities in Tom and promoted him accordingly, eventually selecting him for the esteemed position as Commander of the F-16 combat ready 34th “Rams” Fighter Squadron. Tom received numerous awards and decorations for his service and logged combat time over the skies of Iraq. Following Tom’s Air Force retirement, he accepted a position at Lockheed Martin focusing on the F-22 Raptor in Marietta, Georgia. After successful completion of that job, Tom and his family were transferred to Fort Worth to assist in the production of America’s next generation fighter, the F-35 Lightening II. As we all mourn Tom’s passing and reflect on how much wonderful life Tom packed into his 51 years, we remember and pray for those who survive him…wife Mitzi, children Maddison and Carson, Mother Paula, Grandmother Ann Nagel, brothers Ian and Andy, amongst many other family members. He is also survived by a large cadre of fighter pilots who cherish Divot like a brother. We all now feel emptiness in our hearts without Tom, but also a profound sense of pride in the privilege of serving with him. MEMORIALS: IN LIEU OF FLOWERS: Donate to ABTA.org American Brain Tumor Association. Remember to write in the memo that the donation goes to research. Divot will be laid to rest in Arlington National Cemetery in Arlington, VA. at a later date. Please contact Mitzi with further details. Services provided by Lucas Funeral Home, 817-753-6800

Tom &#8220;Divot&#8221; Smith passed peacefully into the hands of our Lord on March 23, 2015 after a courageous battle with brain cancer. Tom was an incredible husband, father, son, friend and fighter pilot brother. He left our lives far too... View Obituary & Service Information

The family of Thomas James (Divot) Smith created this Life Tributes page to make it easy to share your memories.

Tom “Divot” Smith passed peacefully into the hands of our Lord...

Send flowers to the Smith family.