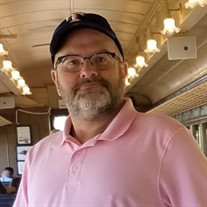 Thomas Edward Redd, 54, beloved husband, father, grandfather, son, brother, uncle, son-in-law, brother-in-law, coworker, and friend to many, died unexpectedly February 1, 2022. Tom was born in Wheaton, Illinois on February 6, 1967 during a snowstorm. He graduated from Hillsboro High School in 1985 and from East Texas State University with a business degree in 1989. Tom was a lifelong, eternally hopeful fan of the Texas Rangers baseball team. In 2021, he met Chuck Morgan, voice of the Texas Rangers, and a bucket list person. Tom was so excited at meeting Chuck…for the next few hours, he couldn’t stop saying, “I just met Chuck Morgan!!!”. And for the shortened 2020 season, Tom was right there in the stands as a Doppelranger, courtesy of his children. Tom loved to fish, even if just for a few minutes at a time. His emphasis was on the “fishing” part, not so much on the “catching” part. This love is shared by his grandsons Peyton and Carter who tend to catch fish bigger than they are! Tom loved to work in the yard - he tried to get grass to grow on Trailwood for five years, he planted mums and pansies every year. He loved to decorate for holidays - especially for Christmas. One could probably have seen the Redd-Bondy house from space for all the lights and inflated characters! ‘Tom was a good man. Everyone who knew Tom could agree on that. His absurdist bent in humor endeared him to his children, grandchildren, nieces, nephews, and friends. His consideration and love for everyone in his family—be it the family he fathered or the family he married into, earned reciprocation. Tom was funny, and he knew it—a joke of his could put even the most awkward at ease. His nephews called him “Sparkles” following an incident with an ornament the color of his surname—a nickname reflective of his good humor and ability to be comfortable in a room. Part of that comfort came from Tom’s kindness and dedication towards his entire family. His children and grandchildren adored him, and the home he made with Erika was filled with cats and a rescue dog named Dolly. Even his nieces by marriage could not escape Tom’s consideration. He and “Aunt E!” (Erika) always remembered books I wanted and would track down a print copy just for me. My particular favorite was The Complete Hitchhiker’s Guide to the Galaxy, whose absurd, satirical, and downright goofy humor remind me now of so many chats with Tom. In true fashion, Tom commissioned Bridget, his artistic niece, to paint a two-foot-tall gnome named Gneville (pronounced Guh-Neville), who greeted visitors in Tom and Erika’s hallway with a grin. While we did not have the good fortune of knowing Tom for as long as his daughters or other members of his family, he really was an uncle to us. He loved us, and we loved him as such. That was just how Tom was—a man so genuinely good that you could not help but love him’ (KMR). Those left to cherish his memory include his wife Erika Anne Bondy, mother Janet Redd, children Olivia Curnutt and husband David, Ryan Redd, Molly Redd, and Allison Redd; grandchildren Peyton, Carter, and Presleigh Curnutt, Mikayla Rodriguez and Mackenzie Gaines; brother and sister-in-law, Jeff and Tracie Redd, sister and brother-in-law, Kathie and Frank Dale. Also, mother-in-law Gabriella Bondy, sister-in-law Elizabeth Bondy Reynolds and her husband Will, brother-in-law Robert Bondy and his wife, Fabiana Martinez, brother-in-law JD Bondy and his wife Susan, and many nieces and nephews, including by marriage. He is preceded in death by his first wife, Sally Ann, and his father, Fred Orville Redd. In lieu of flowers, donations may be made to The diaTribe Foundation—improving the lives of those with diabetes and prediabetes or The Texas Rangers Baseball Foundation—dedicated to improving the lives of those in our community through educational, health, and athletic programming.

The family of Thomas Edward Redd created this Life Tributes page to make it easy to share your memories.