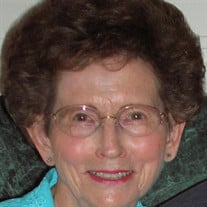 Thelma Jean (McDonald) McAllister, 92, passed away on Monday, February 7, 2022. She was preceded in death by her husband of 68 years, Vernon McAllister, and her son Steven McAllister. Thelma is survived by her daughter, Susan (McAllister) Kasper and husband Bill Kasper; son, Scott McAllister and wife Julie McAllister; brother Jim McDonald; sister JoAnn Hayden; sister Sherrie Zimmerman; eight grandchildren, and five great grandchildren. Thelma was born in Savannah, Missouri, daughter of Win and Bertha (Winslow) McDonald, on January 21, 1930. She was the eldest daughter of ten kids. She met her husband, Vernon McAllister in 1946, while he was home on leave, during his time in the Navy. It was love at first sight. They were married on August 29, 1948, at the Christian Church in Rosendale, Missouri on the hottest day of the year. Vernon often said it was so hot the sweat was running into their shoes. After their honeymoon in Denver Colorado, they moved to St. Louis, Missouri and Thelma went to work in the office of a trucking firm, and later a manufacturing firm. The 50’s and 60’s were filled with raising a family and family vacations. They loved to tent camp and travelled all across the United States. After raising three children, she went back to work in 1974 for the St. Louis Community College at Florissant Valley. She worked in the Admissions office and retired from there, after 15 years, in 1989. Once retired Thelma loved traveling with Vernon. Thelma was happiest when she was cooking, sewing, working in her flower garden, cultivating roses and especially spending time with her grandchildren. They moved to Fort Worth, Texas in 1999 to live close to Scott and his family. During retirement Vernon and Thelma would go play golf as much as possible. Thelma didn’t play golf, but she rode along in the cart and helped Vernon with his game. Family was very important to Thelma and her family will miss her very much.

Thelma Jean (McDonald) McAllister, 92, passed away on Monday, February 7, 2022. She was preceded in death by her husband of 68 years, Vernon McAllister, and her son Steven McAllister. Thelma is survived by her daughter, Susan (McAllister) Kasper... View Obituary & Service Information

The family of Thelma Jean McAllister created this Life Tributes page to make it easy to share your memories.

Send flowers to the McAllister family.