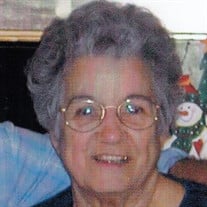 Thelma Luecille Kearby, 94, passed away on Friday, March 12, 2021. Graveside Service will be held at 10:00 a.m. Monday, March 22, at Clark Cemetery, located at 1394 Friendship Road, Weatherford, Texas. In lieu of flowers the family ask to make donations to St. Luke’s United Methodist Church in Haltom City. Born Thelma Luecille Winans on May 9, 1926, in Healdton, Oklahoma, Luecille grew up during the depression and spent most of her childhood living in farming communities, most of it in the unincorporated community of Reck, Oklahoma. In her early years she worked for Western Union and then Southwestern Bell Telephone. It was at Bell Telephone in Ardmore where she met her husband-to-be, Jack Kearby. Married 68 years, they had three children and several grandchildren and great-grandchildren. They were life-long members of St. Luke’s United Methodist Church in Haltom City, and spent their retirement years traveling the world. Survivors include: Sons, Steve, Mike, and his wife Karen; daughter, Sharon, and her husband Joey; grandchildren, Chris, Kelly, Rene, Mandy, Amy, Joey, and Corey; great-grandchildren Alex, Gage, Jackson, Randon, Avery, Carlee, Landon and Rowen.

The family of Thelma Luecille Kearby created this Life Tributes page to make it easy to share your memories.

Send flowers to the Kearby family.