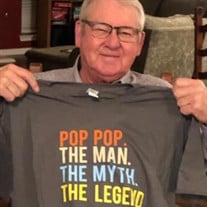 Terry Ronald Scott, beloved husband, father, grandfather, brother, uncle, cousin, and friend went home to be with his Lord and Savior on June 5, 2021, in Keller, Texas, at the age of 79. “PopPop,” as Terry was known, was born in Rotan, Texas, on October 11, 1941, to Alfred “Buck” Scott and Juanita Cooper Scott. He went through the Hamlin school system, attended Tarleton State, and then, graduated from Texas Tech. Growing up on a ranch, he was drawn to the field of agriculture and animal husbandry in which he received his degree. He was in the grain marketing business as a merchandiser for over 40 years, retiring from Gavilon Grain, previously known as Union Equity. Terry’s livelihood helped change the next path his life would take. He met his future bride, Judy Blandford when she purchased feed for the horses owned by her boss, a physician. They married in Amarillo, and together, raised two children. In 1976, they moved to Hurst, Texas, making many friends in the community, and attended Peace Lutheran Church. PopPop always loved spending time with his family at their property in the mountains of Colorado. From an early age, he enjoyed fishing and bird hunting, and later, golf. He loved old cowboy movies, Country/Western music, and the rodeo. PopPop could be found watching sports of all kinds, especially baseball and football. He was a die-hard Dallas Cowboy’s fan and a loyal Texas Ranger’s fan. But his true passion was watching his treasured grandchildren in all their activities, including band and choir concerts, musicals, plays, and sporting events. This year, PopPop was given the honor of being named Birdville Hawk’s Baseball’s Biggest Fan. Although Terry was known as having a quiet, laid-back disposition, he had an amazing zest for life and worked hard to help everyone around him have that same joy. Terry was preceded in death by his parents, Judy’s parents, C.L. and June Blandford, and his brother-in-law, Steven Blandford. He leaves to mourn his passing, his wife of nearly 54 years, Judy, son, Jeffry Scott and his wife, Leslie, and daughter, Julee Lacey and her husband, Todd, sister, Julia Ann White and her husband, Bobby, grandchildren: Landree, Audrey, Logan, Douglas, and Luke, two grandsons of the heart, Austen and Alex Calcote, dear friend, Dinah Golbert and furry friend, Jasmine. The family would like to thank his nurse, Greg, and the entire staff of Freedom Hospice and Metroplex Residential Senior Care for the excellent care and compassion given to PopPop.

Send flowers to the Scott family.