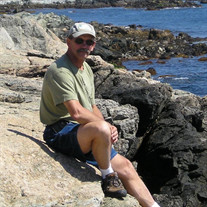 Terry Dean Schrader, born on December 10, 1952, in Sioux Falls, South Dakota, passed away unexpectedly after a brief illness on October 7, 2021 in Grapevine, Texas. The youngest of 4 children born to Edna and Ralph Schrader, Terry grew up in Sioux Falls while spending his summers on his grandparents' farm in Brookings, South Dakota. While Attending college, Terry was introduced to the life’s work in the radio and television broadcasting tower construction industry that launched his career. His work was truly his passion and Terry loved excitement, challenges, and travel the industry provided him. Working his way up the ranks, Terry and his wife started their own broadcast tower maintenance company in 2002 and strived to give his customers the best he had in quality and service. He felt that his customers were more friends than just business associates and he loved to chat, go out for meals or just hang out with them. Terry always tried to impart his knowledge to those that worked for him. Hoping to spur the next generation on to do great things with whatever knowledge and experience he could pass on. A quiet hard-working man, Terry loved his family and friends deeply and was blessed with two wonderful daughter, who he loved dearly. He met his wife of nearly 30 years while working on the Sutro Tower in San Francisco, California and together they moved to Southlake, Texas building a life based on laughter, hard work, and a shared loved of their pets and family. Terry was always ready to help someone in need at the drop of the hat and showed his love by always being there to pitch in wherever necessary. Terry also loved watching sports and working on his vintage trucks in his spare time. Terry is survived by his wife, Marlo Schrader; daughters, Amy Jane (Schrader) Sayre, and Denise Schrader; sisters, Connie, Sauer, and Julie Block; brother-in-law, Barry Conn, and numerous nieces, nephews, and cousins. He will be dearly missed by many. In lieu of flowers please consider a donation in his name to your favorite charity or to either the Hubble Foundation or the Tower Family Foundation that both supports the industry that Terry so dearly loved.

Terry Dean Schrader, born on December 10, 1952, in Sioux Falls, South Dakota, passed away unexpectedly after a brief illness on October 7, 2021 in Grapevine, Texas. The youngest of 4 children born to Edna and Ralph Schrader, Terry grew up in... View Obituary & Service Information

The family of Terry Dean Schrader created this Life Tributes page to make it easy to share your memories.

Send flowers to the Schrader family.