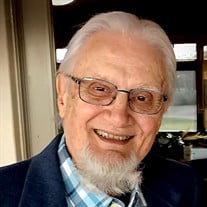 Terrell (Terry) Royce Holsinger Sr. February 26, 1940 - May 23, 2022 Once upon a time, in a land called Ohio was born a boy named Terrell Royce Holsinger, with a light in his eye, a smile on his lips and a song in his heart. His parents, Wilber V Holsinger and Lucille (Tune) Romesberg Holsinger loved him and his older brother deeply, teaching them to love the Lord, sing with their whole heart and care for all. Through the adventures of life Terry enjoyed his time in school, sports, church and music, growing into a young man who left the kingdom in pursuit of an education in a foreign land called Indiana. At Grace Theological Seminary College he pursued music, knowledge and the love of his life, Sandra Harbaugh Holsinger. After a wedding and much rejoicing the happy couple had three children, moving around a bit but finally settling in the magical region called Texas. The stars were big and bright, the life was blessed and the couple were a shining example of a devoted marriage, loving parents, kindness and generosity to all and devotion to Jesus. With a long career spanning from plastering homes to a practicing composites engineer who helped develop the B-2 stealth bomber, Terry continued to make friends and influence people while continuing to grow in wisdom of the Lord, becoming a licensed minister and Bible Scholar. All work and no play was never a problem with Terry. He loved to travel whether by plane, train, boat or car, in a tent, hotel or camper van. Summer vacations were spent with family, friends, and working to help Builders for Christ. Terry and Sandy were blessed by the addition of a son in law and two grandchildren, followed many years later by three great grandchildren. Terry could be heard saying, “if I knew grandchildren were so much fun I would have had them first!” Till, alas, came a day when Terry’s family saw that the years had taken a toll on him. His mind was tired, his soul was weary and his body became sick. His Children, Grandchildren and Great Grandchildren grew concerned about him. Terry grew weaker until on May 23, 2022 he decided to go on his last adventure. One where he would see some people who had left long before him. One where he could sing with his family, once again. One where he would feel whole again. On that day his family cried and spoke many memories about this man they held so high in their regard… this Prince among men… this Great Grandpa… this Grandpa… this Daddy… this Husband… Terrell Royce Holsinger. Terry believed in the wisdom of Psalm 90:12 “So teach us to number our days that we may get a heart of wisdom”. As you think of Terry we ask that you take a moment to hug your child, grandchild, friend, family member or walk in the woods for a moment, an hour or a day. Terrell Royce Holsinger Sr. is survived by his wife, Sandra Louise Harbaugh Holsinger, son, Terrell Royce Holsinger Jr., daughter, Gretchen Holsinger, daughter, Wendy Beth Holsinger Kelso, son-in-law, Timothy M Kelso, granddaughter, Aubrey Ann Kelso, granddaughter, Tori Lynn Kelso, greatgranddaughter, Eliana Louise Huff, great-granddaughter, Elysia Michelle Huff, great-grandson, Liam Robert Alfaro, many sisters and brothers in law, nieces, nephews, cousins, friends, and others who have been touched by his unconditional love. He is already missed.

Terrell (Terry) Royce Holsinger Sr. February 26, 1940 - May 23, 2022 Once upon a time, in a land called Ohio was born a boy named Terrell Royce Holsinger, with a light in his eye, a smile on his lips and a song in his heart. His parents,... View Obituary & Service Information

The family of Terrell Royce Holsinger Sr. created this Life Tributes page to make it easy to share your memories.

Send flowers to the Holsinger family.