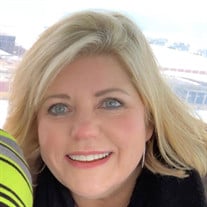 Tamara Herrington Turner, Loving wife, mother, sister, aunt and grandmother passed away Saturday afternoon at the Texas Harris Methodist Hospital Alliance in Fort Worth. Although vaccinated, her compromised immune system from lupus prevented her from fending off the hideous covid virus after a 25 day battle. Tamara is preceded in death by her late husband John David Herrington of Bandera, TX and survived by her grandmother, Mavis McKinney of Pottsboro, TX; parents Jean and Hershell Sanders of Weatherford, TX; husband Michael Matt Turner of Fort Worth, TX; sister Karen Sanders of Saginaw, TX; son and daughter-in-law Garrett and Shelby Hodges Herrington of Ypsilanti, MI; daughter and son-in-law Morgan (Herrington) and PO2 Connor Hargrove, USN of San Diego, CA; step sons Skyler and Nathaniel Turner of Dallas and Fort Worth, TX; grandsons John Kaden (Herrington) Nkeyasen, Cohen McCain Hargrove of San Diego, CA and Oliver Finn Turner of Dallas, TX as well as several aunts, uncles and cousins. Tamara Denise Sanders was born at Baylor University Medical Center in Dallas, Texas on September 20th, 1963. She was a beauty from the day she was born. She was smart, funny, clever, not enough words to describe her bubbling personality. She attended elementary school in Dallas and Houston and her middle school years in Kentucky and Woodlands, Texas. She graduated from Cleburne High School in Texas. Tami’s musical talents began with piano lessons in 5th grade, then voice and guitar lessons while in high school. She thoroughly enjoyed teaching music while in both high school and college and sang at many events during her college years while she was enrolled in the Nursing school at the University of Texas Medical Branch, Galveston. After receiving her BSN, she began her nursing career at Methodist Hospital in Houston working in Orthopedics Surgery and later she headed the Blood Bank at Methodist Hospital. She was married to John in 1990 on board a Hawaiian cruise ship off the island of Kauai. The beauty of these islands lured her and John to move from Houston to Maui where she began working at Maui Memorial Hospital. She worked there until the birth of their first child, Garrett Kai in 1993. His nearly 3 month early delivery left her with life long health issues. Returning from Maui to be near family they relocated to Bandera, TX. Wishing to add to their family they adopted a beautiful baby girl, Morgan in 1995. Tami worked at University Hospital in San Antonio until John’s death in 1999. She and the children moved to Colleyville, TX to be near her parents. While living there she worked at a pain management clinic and later at Harris Methodist Hospital in Bedford as a surgical nurse. Tamara met Matt, who was also a widow, in March 2003 at a wedding reception of mutual acquaintances. They blended their families on the 24th of October 2003 and she suddenly had two additional children to raise. She met the challenge from kindergarten through college sharing many memorable experiences as well as difficulties over the years. Matt’s airline job caused him to be away up to 18 days a month effectively causing Tamara to be a single mom of four while he was on a trip and working as a nurse at the same time. Once remarried, balancing her nursing career and family resulted in many part-time surgical nurse positions, a school nurse as well as starting her own permanent makeup business. Her work fell by the wayside as the demands of teenagers and lupus were taking their toll on Tamara’s time and health. Tamara enjoyed her last several years being a loving aunt to her nephews, Jaxson and Bryce, and a doting grandmother to her three grandsons. She and Matt helped Morgan raise John Kaden in their home for over his first two years and informally adopted him as their own son resulting in his nickname of “Nahnah’s boy!”. Tamara and Matt were looking forward to his retirement and very much enjoyed the many new friends of the Vista Ranch neighborhood of north Fort Worth. Her last days prior to her illness were spent on a beautiful vacation with Matt in Yellowstone National park. Tamara’s friends span the continental US to Hawaii and are too numerous to count. All of which are deeply saddened by her untimely passing. We wish her spirit to thrive in each of us, so shall her memory continue to thrive as well. Memorial Service will be held at 6 pm, Thursday, October 7, 2021 at Lucas Funeral Chapel, 1601 South Main Street, Keller, Texas 76248. Please note the family requests mask be worn for the service. In lieu of flowers, family requests donations be made to Lupus Foundation of America at lupus.org.

The family of Tamara Herrington Turner created this Life Tributes page to make it easy to share your memories.

Send flowers to the Turner family.