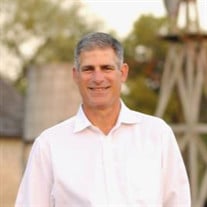 Steven B. Hatch, 53, passed away at his home in Arizona on Monday, December 6, 2021, surrounded by his family. Steve was born in Medina, Ohio on March 7, 1968. He was the fourth and youngest son to John and Johnell Hatch. Steve may have been born in Ohio, but he got to Texas as fast as he could when the Hatch family moved to San Antonio in 1970. Later, they moved to the Hurst-Euless-Bedford area in 1978. There he would meet his future wife, Stephanie Ebert, when he joined her sixth-grade class at Bellaire Elementary School in Hurst, Texas. Steve graduated in 1986 from Trinity High School, where he played both varsity basketball and varsity golf. Pursuing his passion for golf, Steve worked at Riverside Golf Club in Grand Prairie while attending high school. Steve received a full scholarship to play on the University of Texas at Arlington golf team where he earned his Bachelor's Degree in Communications in 1991. His time at UTA also opened the door to meeting his lifelong best friends and poker buddies. Just a month after graduating from college, Steve married his high school and college sweetheart, Stephanie. They shared thirty years of marriage and were a couple for thirty-seven years. Steve always told everyone he met, that he and Stephanie were soulmates, best friends, and that she was the love of his life. They could be in a room together and no words had to be spoken. They were content just being together, and they never took this gift for granted. Their marriage brought them two perfect daughters, Lauren and Victoria. Steve loved his girls with all of his heart and was very proud of them both. He enjoyed sharing how they had grown up into smart, talented and beautiful adults (inside and out). Lauren is pursuing her master's degree in Data Analytics and Victoria is a junior majoring in Microbiology. Steve started his golf career at The Four Seasons Resort and Club in Irving, Texas. While there, he became a member of the PGA and was promoted to Assistant Golf Professional for the member's course. In 1995, he made the move to Brookhollow Country Club in Dallas, Texas. Brookhollow always held a special place in Steve's heart. He loved the golf course and the people. In 2003, a group from Brookhollow approached Steve to be the Head Golf Professional/Assistant GM at a new course being built in Carrabelle, Florida right on the water of the Gulf of Mexico. The family moved to Florida and enjoyed ten years in The Sunshine State. There were many adventures from beach trips, a few tropical storms, delicious seafood, deep-sea fishing, many new varieties of insects and of course alligators! In 2013, he brought the family back to their home of Texas. Steve became the Director of Golf at Horseshoe Bay Resort and Club. Lake life was wonderful, but Steve was offered the job as Director of Golf at Kingwood Country Club five years later. Finally, Steve was offered the position of Director of Golf at Ventana Canyon Resort and Club in Tucson, Arizona. It was his dream job. He started on September 1, 2020. Steve loved his job anywhere he was, but the best part of his work was the people he worked with and the guests and members he met along the way. Steve was a people-person and made so many wonderful friends through golf. Steve had many interests and passions throughout his life. He loved watching just about any sporting event (especially golf), never saw a mountain he did not want to ski, enjoyed stopping by the pier after work to throw a fishing line into the Gulf, playing a game of cards with the boys, spending time with his family, and traveling to Alaska, Seattle, San Francisco, Philadelphia, Boston, Toronto, Jamacia, Mexico, the Dominican Republic and the Caribbean to name a few. Steve also loved to cook. He especially enjoyed preparing the "big" holiday meals and smoking the perfect brisket. His apple pie, bread pudding, oatmeal ice cream and pumpkin cheesecake were annual favorites. Steve lost a year-long battle with kidney cancer on December 6, 2021 at home with his family. He considered himself a Christian and lived each day that way. He is preceded in death by his brother, David; his grandparents, John and Carrie Hatch; John and Winnell McMinn and his parents-in-law, Bruce and Honore Ebert. Survivors: His wife Stephanie, his daughters Lauren and Victoria, his parents John and Johnell Hatch, his brothers Michael (Kay) and Scot, nephews Jason (Katie), Tyler and Jarrett, nieces Taylor (Joe), Paige (Tyler) and Haley (Ryan), brother-in-law David (Carey), the Joplin family, Art Atchison (MaryBeth), Clay Jett (Julie), Tim Pollard (Penney), Breck Daniel (Betsy) and many, many friends. In lieu of flowers, donations would be appreciated to the Steven B. Hatch Scholarship Fund. Click on link below to donate: Steven B. Hatch Scholarship Fund

Steven B. Hatch, 53, passed away at his home in Arizona on Monday, December 6, 2021, surrounded by his family. Steve was born in Medina, Ohio on March 7, 1968. He was the fourth and youngest son to John and Johnell Hatch. Steve may have been... View Obituary & Service Information

The family of Steven B. Hatch created this Life Tributes page to make it easy to share your memories.

Send flowers to the Hatch family.