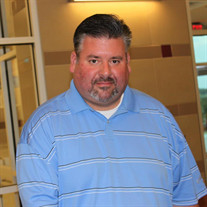 Steven Michael Davis II was born on April 11, 1972 in Akron, Ohio and passed away on March 16, 2021. He was preceded in death by his beloved grandparents George and Clara Davis and James and Gloria Pivarski. He is survived by daughters Brooke Nicole, Brandy Michelle and their mother Belinda; parents Steven Davis and Jeanette Pivarski, sisters Kellyann Nelsen, Allison Davis and their families. Growing up, Steve was a protective big brother and loving son. He was outgoing and friendly, making friends wherever he lived: Lake Charles, LA; Houston, TX; Yanbu, Saudi Arabia; and Humble, TX. He graduated from Humble High School in 1990, and then went on to attend Purdue University where he graduated with a degree in Aviation in 1994. As a child, he loved spending summers in Ohio, visiting his extended family as well as riding motorcycles, three wheelers, and go-carts on his grandparents’ land. He was a dedicated heavy metal music fan, with a love for sports cars. Steve married Belinda (Bo) Bollom in 1996. Steve worked for Verizon Wireless and then started his own real estate company. Steve and Belinda started their family in Arlington, Texas with the birth of their daughter, Brooke Nicole in 2001. The family moved to Keller, Texas and in 2003 they had their second daughter Brandy Michelle. Steve was a loving father, supporting Brooke’s and Brandy’s sports, activities, and school functions. He loved cooking and grilling with his family. When his daughters were growing up, he loved to make homemade pizza with them. He loved to stack his daughters’ food into pyramids to make the family dinners special. He became an outdoorsman, becoming passionate about deer and duck hunting. He enjoyed, riding bikes with his family, live concerts, and riding ATVs. Steve was a fun loving, easy going man, who enjoyed time with his family and friends. He never failed to put a smile on everyone’s face. He will be missed by all who knew him. A memorial will be held at Lucas Funeral Home of Grapevine on Thursday, April 1st at 2pm. For those who cannot attend the service, a live stream of the service can be found here: https://video.ibm.com/channel/23814965/video/7qqpen

Steven Michael Davis II was born on April 11, 1972 in Akron, Ohio and passed away on March 16, 2021. He was preceded in death by his beloved grandparents George and Clara Davis and James and Gloria Pivarski. He is survived by daughters Brooke... View Obituary & Service Information

Send flowers to the Davis family.