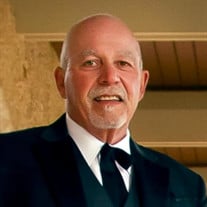 On Sunday, January 30th, 2022 Stephen (Steve) Courtney Spencer lost the race he had been running so courageously for the last few years. He was lovingly surrounded by family and friends. Steve entered this world on June 21st, 1947 in Orleans, Vermont to the late Gordon and Barbara Spencer. Steve would later become big brother to little brother Stan Spencer. He loved that role and was always proud to be Stan’s brother. Steve attended Orleans Schools and in 1965 graduated from Orleans High School. He was lovingly known as “Hoop” because of his incredible abilities on the basketball court. Steve was recently honored with an induction into the Orleans County, VT Athletic Hall of Fame. He was so proud of this recognition. Following his graduation, Steve enlisted as a Marine and served his country in Vietnam from March 1966 to March 1969. He could be found reminiscing about his service and honoring fellow veterans through the aisles of home improvement stores any day of the week. He married Margaret Brucker in 1968. Together they had 5 children: Susan, Amy, Steven, Megan & Jonathon. They lived in the Philadelphia area suburbs for many years and made many wonderful friends there. This union dissolved and a few years later, he met and married Cheryl Coles. He very quickly became Pop to her 4 children: Brandi, Brittney, Jeffrey, and Audra. They moved to North Texas in 2001. He felt great pride in telling people he had 9 children! Steve received a diagnosis of Idiopathic Pulmonary Fibrosis in 2014, and became a lung transplant recipient in 2017. He was so humbled to have been one of the oldest on that list. He was able to receive this gift and continue fighting only because he always took such good care of his body and anyone who knew him knows that! Steve lived several lifetimes in the 74 years he enjoyed on this earth. His big, kind heart led him to easily fill the role of “dad” or “pop” in many people’s lives. He never stopped being a father, and he always took the time to listen and provide thoughtful – if sometimes tough – fatherly advice. Steve celebrated life and derived great joy from life’s little pleasures: a kiss from his dear wife, a box of Oreos, a great round of golf, a searing hot sauce, and a well-placed pun. Steve was cut from the same cloth as his favorite classic Western characters: humble, gallant, self-sufficient, loyal, and always coming to the rescue of those most in need. There are many who owe Steve a debt of gratitude for the guidance and encouragement he gave. Steve is survived by many, including his loving wife Cheryl Coles-Spencer, brother Stan and wife Marion Spencer, 9 children,12 grandchildren, 5 great-grandchildren, and innumerable family and friends. Always a humble gentleman, Steve has requested interment without service or ceremony at the Dallas/Ft. Worth National Cemetery. A Celebration of Life will be held on Saturday, June 25th at the Spencer household in North Richland Hills, TX from 2pm-8pm. We will celebrate Steve by sharing his favorite things, and the endless stories of how he has touched our lives. Those unable to attend, and wishing to celebrate Steve should raise a glass, tell a joke, and help a friend in need. And if you happen to be a golfer, play a round for Steve! Steve will be truly missed by all who had the pleasure to know him. We take comfort in the fact that he is finally breathing easy and playing his favorite 18 holes for the rest of time!

On Sunday, January 30th, 2022 Stephen (Steve) Courtney Spencer lost the race he had been running so courageously for the last few years. He was lovingly surrounded by family and friends. Steve entered this world on June 21st, 1947 in Orleans,... View Obituary & Service Information

The family of Stephen Courtney Spencer created this Life Tributes page to make it easy to share your memories.

Send flowers to the Spencer family.