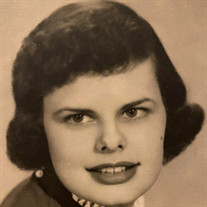 Shirley Loepp, of Denton Texas, passed away at the age of 82 on Saturday, January 8th 2022 at 8:51pm. Shirley was born in Lindsborg Kansas on November 15th, 1939 to her parents Theodore & Elizabeth Loepp. Shirley spent most of her younger years growing up on their family farm with her older sister Virginia and often referred to the farm life as the happiest place she could ever be. Shirley married Jack Greer on Feb 14th, 1959. The couple moved to the Fort Worth area in the early 1960’s for Jack’s employer, Bell Helicopter, where he worked as a pilot & mechanic. Shirley worked as an Accountant for most of her adult life until she retired in 2007. Shirley’s true passion were her two grandchildren Morgan and Blake. The boys were certainly the love of her life and sparkle in her eye. We were fortunate to live close so Shirley was a constant part of our lives. She would help with whatever was asked; cook, clean, babysit, carpool rides to kids games…didn’t matter, she was always there for us and not once ever complained about it. It was a true blessing having her around for so many years. When Shirley’s health started to decline in 2014, she moved into an Assisted Living in Denton. We were again fortunate to have her close to us which made becoming a caregiver much easier for Traci. Although Shirley’s health continued to decline over the next several years, she and Traci grew closer every year. The bond between mother & daughter was very strong regardless of the ups and downs of life. The patience, compassion and care that was given was such a beautiful thing to witness, even up to the final day of Shirley’s life. For that I thank you Traci… Shirley will be remembered as a loving mother, grandmother, sister, aunt and friend. Shirley was a private person that kept to herself most of the time but deeply cared about the wellbeing of her family. Oftentimes calling and checking in just to make sure things were good and that we were all safe. Each of you attending today were part of many happy conversations that you never knew took place, but just know she was thinking of you often. Thank you Shirley for all of the love, support and guidance. You will be missed dearly…we love you! Shirley is survived by her daughter; Traci Parkey of Argyle Texas, son-in-law; Robert Parkey of Argyle Texas. Son; Gregg Greer of Fort Worth, two grandchildren; Morgan & Blake Parkey both of Argyle Texas. Niece; Johnnie & John Boyd of Fort Worth and her children, Chip, John IV and Mike. And her life-long friend, Beverly Hudson of East Texas. Shirley had a wonderful relationship with her mother, Elizabeth. They would talk several times a week. When Elizabeth passed (Grandma Great) in 2007 it was very difficult for Shirley, but she had the love and support of her family and a few very dear friends. We would travel with Shirley to go visit Elizabeth in Lindsborg Kansas most every summer for many years. Lindsborg is a beautiful, Swedish & German rural town. Population 3300. She’d enjoy driving down the old dirt roads to see their family farm house, visit local area attractions where she grew up, including Coronado Heights (an observation building built in the early 1930’s) and of course walk and shop on Main Steet. She enjoyed playing cards with family, Skip-Bo was her favorite. She loved her family dearly, Elvis, and The Cowboys! The Graveside Service will be held at Bluebonnet Memorial Cemetery on Thursday, January 13, 2022 at 2:00pm.

Shirley Loepp, of Denton Texas, passed away at the age of 82 on Saturday, January 8th 2022 at 8:51pm. Shirley was born in Lindsborg Kansas on November 15th, 1939 to her parents Theodore & Elizabeth Loepp. Shirley spent most of her younger years... View Obituary & Service Information

The family of Shirley Jorene Loepp created this Life Tributes page to make it easy to share your memories.

Shirley Loepp, of Denton Texas, passed away at the age of 82...

Send flowers to the Loepp family.