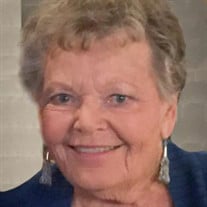 Shirley Jean Emde of Dallas, formally a long-time resident of Perry, OK, passed peacefully, surrounded by family, on the evening of May 25, 2022, two weeks after her ninety-first birthday. Service to be held at First United Methodist Church of Perry OK, Saturday, June 11, 2022, at 11:00 AM. A reception will be held following the service at the Holiday Inn Express in Perry. Jean was born May 11, 1931 in Oklahoma City, OK, the only child of Burl and Ione Bliss. The family moved to Stillwater, OK in 1945 and it was from there that Jean graduated high school in 1949. September 2, 1949, she wed Etsell Otto Emde. This began a sixty-one year marriage. In 1958, Jean and Etsell moved to Perry, OK, where Jean would spend the next fifty-three years of her life. Throughout the years, their home was the site of numerous dinner parties and social gatherings. Jean loved nothing more than planning and hosting a good party. The booth in her kitchen was always filled with card games, storytelling, and laughter. Her pantry always contained plenty of drinks, chips, and salsa for anyone who found their way up her large, circle drive at the end of 8th St.; and plenty did. Jean was very active in school activities during her children’s school years, as well as a long-standing member of PEO and Perry Study Club. After Etsell retired, they turned their attention to traveling and focusing on their 3 grandsons. They were the pride of her life. Jean even rented an apartment in Texas, so she could enjoy extended stays and not miss out on the boys’ activities. She was the ultimate Nannaw. In 1991, she sold some acreage that her father had left her, and purchased “Tis Bliss”, the family cabin in Green Mountain Falls, CO. This was her favorite place in the world, and as a fourth generation begins to enjoy it, the cabin has become her family legacy. In 1994, together with Etsell, they built and founded EEE Mini Storage in Perry. Over the next sixteen years, they ran the business together, until Etsell passed away in 2010. A year later, Jean moved to Dallas to be near her three grandsons. The past eleven years, she has had a front row seat to the early years of her four great-grandchildren and the endless activities that entailed. Jean was preceded in death by her parents, her husband, Etsell, and her son, Troy Douglas. She is remembered by her son, Etsell Otto, Jr. of Tulsa, OK; her daughter, Jennifer Jean and husband Rick Vasek of Bedford, TX, her grandsons, Julian Preston Vasek and his partner Jason Snider of Dallas; Maison Dalton Vasek and his wife Ashley of Dallas; Hagen Emerson Vasek and his wife Karli of McKinney, TX, as well as great-grandchildren Ava Bliss and Lila James of Dallas and Jack Douglas and Emerson Vail of McKinney. In lieu of flowers, the family would appreciate contributions to the American Cancer Society. Lucas Funeral Home Hurst, TX

Shirley Jean Emde of Dallas, formally a long-time resident of Perry, OK, passed peacefully, surrounded by family, on the evening of May 25, 2022, two weeks after her ninety-first birthday. Service to be held at First United Methodist Church... View Obituary & Service Information

The family of Shirley Jean Emde created this Life Tributes page to make it easy to share your memories.

Shirley Jean Emde of Dallas, formally a long-time resident of...