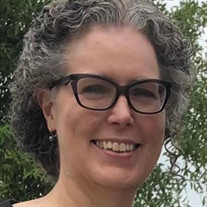 On the morning of January 20th, 2022, Shawna Ann Kennedy of Bedford, Texas, died peacefully at home from complications of cancer. She was 55 years old. Born in Naples to Julie Kennedy Cross and Rodger Kennedy, she grew up in Texarkana, graduating from Liberty Eylau High School in 1984 and receiving her BS in Biology from North Texas University. She held several jobs working in research labs until finding her calling as a histocompatibility specialist, helping transplant patients find the organs they so desperately needed. Shawna was an avid reader with a veracious appetite for everything from fantasy to the workings of the human mind. She had a passion for dance, starting with ballet and tap in the first grade and ending up as a performer and teacher of belly dancing. Later in life she became interested in fitness, training for and running half marathons, and learning to lift weights. She enjoyed costumes, theatre and any live performance, but especially musicals. Shawna is preceded in death by her father, Rodger Kennedy. She is survived by her husband, Des Whittall, her children, Charlotte and Ivy, her mothers, Julie Cross and Mary Garland, her other father, Stan Cross, her sister, Hillary Fontana, her brothers, Shawn Kennedy and Brian Cross, and many aunts, uncles, cousins, nieces and nephews. A public memorial service will be held at 10:00 A.M., on Tuesday the 25th of January at the Lucas Funeral home followed by a celebratory lunch at Calbrese in South Lake at 11:00 A.M. In her final days Shawna was helped by the hospice team at Community Health Care, if you would like to make a donation in her memory it will help them to provide these essential services to more people. https://www.chot.org/giving/, or Community Healthcare of Texas, 6100 Western Place, Suite 105, Fort Worth, TX 76107.

On the morning of January 20th, 2022, Shawna Ann Kennedy of Bedford, Texas, died peacefully at home from complications of cancer. She was 55 years old. Born in Naples to Julie Kennedy Cross and Rodger Kennedy, she grew up in Texarkana, graduating... View Obituary & Service Information

The family of Shawna Ann Kennedy created this Life Tributes page to make it easy to share your memories.

Send flowers to the Kennedy family.