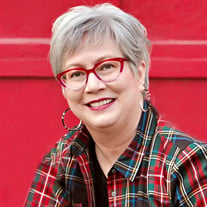 Shari Sue Vanderwork was born in Enid, Oklahoma, on May 15, 1958, to Charles H. Vanderwork and Marydel (Plew) Vanderwork and was raised on a farm just outside of Enid near Waukomis, Oklahoma. She attended Pioneer School, which her grandfather helped build, and was active in many rural Oklahoma activities, including 4-H and showing livestock, specifically Hereford cattle. Through 4-H and with the help of her mother, Shari learned to become a wonderful seamstress and gave many clothing and cooking demonstrations, also participating in gardening and canning. During her high school years, she also participated in a 4-H European exchange program where she spent time in Sweden living with a family and learning to live a Swedish rural lifestyle. She was a true farm girl with cosmopolitan style and grace. Following her graduation from Pioneer High School in 1976, Shari attended Oklahoma Christian College and then pursued a career as an administrative assistant. In 1995, Shari’s son Lyric was born, and soon after his birth it was discovered he had been born with Severe Combined Immunodeficiency, a syndrome which caused him the inability to fight infection. Lyric’s diagnosis took him and Shari to Houston for treatment at Texas Children’s Hospital where Lyric subsequently passed away at the age of 18 months. After Lyric’s death, Shari stayed in the Houston area and began a career as an administrative assistant in the Ft. Bend Independent School District. In 2013, Shari moved to Grapevine, Texas, to be closer to family and spent her remaining years serving others (especially the less fortunate), enjoying life with her personal and church families, and working for Grapevine-Colleyville Independent School District and Faith Christian School where she met some of her closest friends and poured her heart into making life better for the students she served. Shari passed from this life on Thursday, March 4th, 2021, following an unexpected health struggle. She was preceded in death by her parents, her brother Danny Earl Vanderwork, her sister Ramona Ann (Vanderwork) Dobson and husband Max Dobson, and her son Lyric Elliott Vanderwork. She is survived by her sister Nancy Jane (Vanderwork) Friesen and her husband Donnie and numerous nieces and nephews who were like children, grandchildren, and extremely-close friends to her. She will be dearly missed by her family and friends as she became an integral part of all the lives she touched, always trying to put others ahead of herself. Her faith in God and his son Jesus Christ was her greatest blessing and will bring those who loved her poignant inspiration to continue her humble legacy of loving others, a legacy passed on to her by Jesus himself. A memorial service for Shari will be held on Saturday, March 13th, at 11:00 am at Riverside Church of Christ in Coppell (150 E Beltline Road, Coppell, TX, 75019). For those wishing to donate in honor of Shari, her family requests that donations be made to Level Pathways at levelpathways.org. Level Pathways exists to help homeless teens and was a cause Shari lovingly supported.

Shari Sue Vanderwork was born in Enid, Oklahoma, on May 15, 1958, to Charles H. Vanderwork and Marydel (Plew) Vanderwork and was raised on a farm just outside of Enid near Waukomis, Oklahoma. She attended Pioneer School, which her grandfather... View Obituary & Service Information

The family of Shari Sue Vanderwork created this Life Tributes page to make it easy to share your memories.

Send flowers to the Vanderwork family.