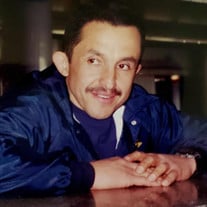 Sergio G. Reyes, born March 11th, 1966, passed away on the morning of August 25th, 2021. He was 55 years old. Originally from Guatemala City, Guatemala, he immigrated to Chicago in 1978 at the age of 12. Though he initially felt out-of-place, he would come to know and love Chicago wholeheartedly as his home. His brother Danilo fostered in him a lifelong love of music—his taste ranged from Led Zeppelin to Billy Joel; from Chicago-style House, to The Rolling Stones, and countless other artists. As a young man he became an avid runner. He completed 12 marathons and numerous shorter races. In 1990 he met the love of his life, Connie, with whom he created a joyous and beautiful life. They were happily married for 29 years. He is survived by his sons Andres, Esteban, and Sergio Alan; his beloved wife, Concepcion; daughter Monica; brother Danilo; mother and father, Isidora and Angel. Through a good friend he was given the opportunity to work at American Airlines, where he would go on to contribute 34 years of service in multiple roles. He spent his time there making many friendships and took pride in his work. Working for the airline gave him the chance to travel the world with his friends and family, and visit places that amazed him, such as France, Italy, Japan and Ireland, among many others. In 2006 he was hospitalized and given a limited prognosis of 2 years. He placed his trust in God, who gave him the strength to continue enjoying and making the most of his life. Never did he let his illness diminish his spirit—he continued to see the world with his wife, and always worked his hardest to support his loved ones. His family will always remember him as devoted, selfless, loving and caring. He brought into this world a one-of-a-kind, creative affection without comparison. Those closest to him were blessed to experience the gift of his humor. Thankfully, he spent some of his last days on a spiritual retreat with one of his sons, where he meditated, contemplated, and enjoyed the company of God, who he now rests in for all eternity. Memorial Service will be held at 2 pm, Saturday, September 11, 2021 at Lucas Funeral Chapel, 1601 South Main Street, Keller, Texas 76248.

Sergio G. Reyes, born March 11th, 1966, passed away on the morning of August 25th, 2021. He was 55 years old. Originally from Guatemala City, Guatemala, he immigrated to Chicago in 1978 at the age of 12. Though he initially felt out-of-place,... View Obituary & Service Information

The family of Sergio Reyes created this Life Tributes page to make it easy to share your memories.

Send flowers to the Reyes family.