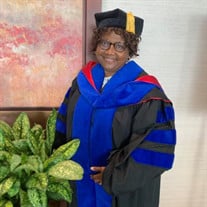 Dr. Sarian Dolly Forster, fondly called Dolly by those close to her, was born on 25th of September, 1951 to Edward Francis Forster and Blanche Clarissa King. She was the third of seven children. As a child, Sarian was very precocious and wise beyond her years. She had an inquisitive and enquiring mind and would ask questions of adults that would both puzzle and challenge them, an early indication of the critical thinker that she later became. For example, of birthdays, she asked “How can one be born every year on their anniversary?” and of death, she wondered, “How was it possible for one to breathe inside a coffin deep in a hole in the ground?” She asked these questions so often that “Grampa” Charles King would say, “Child you ask too many questions, are you a lawyer or will you become one?” Sarian loved a healthy debate, so that could well have been her fate, but education and teaching were her true calling, like her mother before her. Stories from her many years as a teacher will be best recounted by her students. Sarian's faith and trust in God were extremely strong; she had a faith that guided her all through her life and during her brief illness. In her early years as a student, she read quite a lot of religious critics. She questioned, challenged, and doubted, but this ultimately led to an extremely strong faith and belief in God, a faith rooted on terra firma. Sarian The Great Unifier, was a caring, sharing and very responsible older sister who took care of all her siblings in every aspect of their lives. She took over the family mantle and baton quite young, so much so that when their parents passed on, her siblings naturally turned to her as their parental figure, and she offered guidance, peacemaking and words of wisdom. Losing her now feels like re-living the loss of their parents all over again. Sarian wore many different hats and acquired many different titles during the course of her life, but the one that meant the most to her, was being a mother. She often said that her mother told her that motherhood was a calling, and it was one that she rose too gracefully. She was ambitious, but her ambitions were never at the expense of her children. Her children will find solace in the many happy memories of their childhood with her. They fondly remember how mischievous she was, and the pranks she would play on them after late nights of watching horror movies, the hours spent playing board games, and the lazy Sunday afternoons napping and going on long drives after a hearty Sunday lunch. In many ways, she was not your quintessential African mother; she had a playfulness about her that is uncommon to find in a mother of four and the director of an international school. But life wasn’t all fun and games – having been one of those people who excel in everything she does, her girls were always aware that she expected the same from them. She explored any opportunity for them to reach their potential, beamed with pride in their successes and interrogated their failures. Sarian understood that her job as a mother was not to stifle her children, but to enhance their strengths, teach them how to work on their weaknesses and equip them with skills that they would need to live a happy and productive life. Sarian had an extremely strong sense of family values for both the immediate and extended family. This made her share all she had and knew. She was a great believer in “All for one and one for all” and in the community spirit and maxim “United we stand, divided we fall.” She extended this belief to others beyond her family, which earned her the nickname amongst the Wollof mères in our Dobson neighborhood (Fayen, Chamen, Joben et al) “Dolly Ya Barh” and in Krio, “Dolly na Good Pikin”. Through Sarian, our sibling group was extended beyond our bloodline to many friends and associates during the course of her life. Sarian, we are eternally grateful for this network. Sarian had a great passion and love for teaching and imparting knowledge. She spent many hours after school offering private after school tuition to her students free of charge. Later she would also invite home her sixth form students for general discussions on a range of topics. Her joy and excitement during the release of examination results was indescribable because it was personal. Sarian was a voracious reader and a great thinker, and these traits made her stellar amongst a constellation of bright minds, says one of her colleagues. Her love of books and reading started at an early age, and accounted for the depth and breadth of her knowledge beyond her area of study. Her interests were many and varied. Sarian not only fed the mind and intellect, but also our bodies with African as well as world cuisines. Cooking was one of her great passions; it was never rushed, nothing was compromised, and there was never too much to do. Sarian's nurturing and caring nature was also demonstrated in her love for gardening. She would tend to her greens and vegetables with loving care just as she would tend to her students. Sarian's garden and produce were lush and bountiful even in the most arid of places, like Texas where she lived later in life. Her careful gardening was a true testament to her nurturing nature. Sarian was preceded in death By her Parents Edward and Blanche Forster and her sister Annie Forster. Sarian is survived by her Daughters Bishola Roberts-Enahoro, Iyesha Forster, Nadeen Roberts and Nadia Forster, her son-in-law George Enahoro and grandchildren, Naarah Enahoro, Micah Enahoro, and Jamin Enahoro, as well as siblings Rachel Evans, Eunice Forster, Julia David, Charles Forster, Davidson Forster, numerous cousins, nieces, nephews and devoted friends and family.

Dr. Sarian Dolly Forster, fondly called Dolly by those close to her, was born on 25th of September, 1951 to Edward Francis Forster and Blanche Clarissa King. She was the third of seven children. As a child, Sarian was very precocious and wise... View Obituary & Service Information

Send flowers to the Forster family.