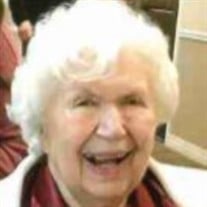 Saralynn Dudney Beasley completed her life journey on November 26, 2021 in Fort Worth, Texas and was received by her Father in Heaven. She was born on June 12, 1932 in Magnolia, Arkansas to Ralph Theodore and Sarah McDaniel Dudney. Saralynn grew up in Magnolia, Ark., graduating from Magnolia High School in 1950. She attended Southern State College before meeting her sweetheart, William M. 'Bill' Beasley, Jr. They were married June 3, 1951 and happily married for 53 years. She followed her husband's Oil & Gas career, living in Arkansas, Montana, Louisiana, Mississippi and Alaska before returning to north Louisiana for 40 years. Saralynn was a master homemaker, creating warm, inviting homes with delicious meals and establishing many long-lasting friendships everywhere they lived. She and Bill were very involved in local Baptist churches and helped establish the Ellerbee Road Baptist Church in Shreveport, LA. Saralynn moved to Texas in 2014 to be in her daughter's care. Saralynn was preceded in death by her parents, by her brother Dolph Dudney, sisters Hazel Goodwin and Madge Gean, by her husband, Bill Beasley and by sons Williams Calvin Beasley and Allen Beasley. She is survived by her daughter, Beth (David) Lytner of Burleson, TX, daughter-in-law, Tricia Beasley of Shreveport, by seven grandchildren: Michaella (Oscar) Rodriguez and their son Teddy of Austin, Sarah Beth Perry of NYC, by Justin (Melissa), Blake and Ashley McLawchlin of Shreveport, Brian (Kayla) Lytner and Emily Lytner of DFW, TX area, by nieces and nephews including John Allen Gean of Magnolia and Jan Biggers of Branson, MO as well as seven great-grandchildren. A Christian Burial Service will be held at Lewis Funeral Home, 420 N. Jackson, Magnolia, Ark. on December 10th at 10:30 a.m. preceded by Visitation at 9 a.m. when family will be greeting friends and relatives. Burial will follow at Magnolia Memorial Park Cemetery, 370 Columbia Rd 36, Magnolia, Ark. In lieu of flowers the family requests memorial donations be made to Ellerbee Road Baptist Church in Shreveport, LA; St. Paul Lutheran Church in Fort Worth, TX or to James L. West Center for Dementia Care in Fort Worth, TX. Condolences may be left on Saralynn Beasley's online guest book. The family wishes to extend their gratitude to the great care and dignity given to Mrs. Beasley by staff at all levels of service at James L. West Center for Dementia Care.

Saralynn Dudney Beasley completed her life journey on November 26, 2021 in Fort Worth, Texas and was received by her Father in Heaven. She was born on June 12, 1932 in Magnolia, Arkansas to Ralph Theodore and Sarah McDaniel Dudney. Saralynn... View Obituary & Service Information

The family of Saralynn Dudney Beasley created this Life Tributes page to make it easy to share your memories.

Send flowers to the Beasley family.