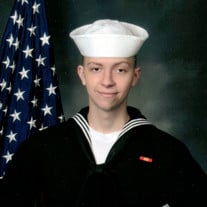 Samuel Alden Elliott, age 22, pursued and achieved his dream of becoming a sailor in the United States Navy. His life was tragically cut short on May 25, 2022. He was doing what he loved, serving his country; stationed first in Rota, Spain on the U.S.S. Ross, and more recently in Virginia. Samuel was born in San Antonio, Texas, March 2, 2000 to Sean and April Elliott. He grew up between Texas and California. In middle school Sam played football and played the violin & cello. He graduated early from Eaton High School at the age of 17, where he was a member of the Patriot Club, worked in the counseling office and was loved by staff. He was in the STEM program and had the distinct honor of being the school’s first Homecoming Duke. He graduated Naval boot camp on his 18th birthday, March 2, 2018. Samuel married his sweetheart, Leslie, on February 15, 2019, and the couple made their first home together on the military base in Rota, Spain and then in Herndon, Virginia. He served on the U.S.S Ross where he quickly excelled to the rank of E5 as a Cryptologic Technician Technical Petty Officer 2nd class, which enabled him and Leslie to see the world. His final station was at the National Reconnaissance Office in Chantilly, Virginia. While serving, Sam was actively pursuing a degree in Cybersecurity from the University of Maryland Global Campus. His love of computers and technology incorporated his most treasured hobby, online gaming, where he stayed connected with many of his closest friends. He enjoyed woodworking as a shared interest with his father. He loved puzzles, paintball and spending time with family and friends. Samuel will be dearly missed by many. He was known to be highly passionate about his work and earned the respect of his peers. He was a giving and caring soul. He was smart and a bit of a perfectionist. He could be very persistent once he set his mind to something and this allowed him to excel at many things. He despised shopping, doing dishes, and driving more than ten minutes to get anywhere. He touched the lives of so many people in such a short amount of time; he was able to accomplish much before his untimely passing, including teaching himself to speak German. He is survived by his wife, Leslie Elliott; daughter, Vivian Elliott; parents, Sean and April Elliott; sisters, Alana Elliott and her fiancé Sam Waltz, Ayla Elliott and her fiancé Blue Simmons and their son Silver, Chantel Anderson and her husband Sam Anderson; grandma, Janie Elliott and nanny Jean Halsted and papa, Douglas Halsted; his in-laws, 3 brother-in-laws, 6 sister-in-laws, and another nephew. His best friends Bryant, Danny, Emery, Chandler, Rafael, and Terry. Visitation will be held from 6 pm to 8 pm, Monday, June 20, 2022 at Lucas Funeral Home, 1601 South Main Street, Keller, Texas 76248. Funeral Service will be held at 12 noon, Tuesday, June 21, 2022 at Lucas Funeral Chapel. Graveside Service with full military honors will be held at 2 pm, Tuesday, June 21, 2022 at Dallas Fort Worth National Cemetery, 2000 Mountain Creek Parkway, Dallas, Texas.

Samuel Alden Elliott, age 22, pursued and achieved his dream of becoming a sailor in the United States Navy. His life was tragically cut short on May 25, 2022. He was doing what he loved, serving his country; stationed first in Rota, Spain on... View Obituary & Service Information

The family of Samuel Alden Elliott created this Life Tributes page to make it easy to share your memories.

Send flowers to the Elliott family.