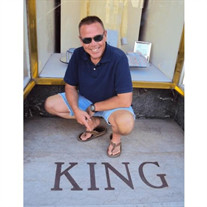 Russell Ted Juren, loyal husband, father, grandfather, brother, uncle and friend, was called to be with his Heavenly Father on Wednesday, May 26, 2021, a week after his 62nd birthday. Russell’s life will be celebrated on Tuesday, June 1st with a visitation from 6:00-8:00 pm at St. Paul Lutheran Church, 1800 West Freeway in Fort Worth. Visitation at St. Paul Lutheran Church on Wednesday, June 2nd from 12:00-12:45, and funeral service immediately after. Internment to follow at Mount Olivet Cemetery, 2301 N. Sylvania Avenue in Fort Worth. Arrangements made by Lucas Funeral Home in Hurst, Texas. Russell was born on May 19, 1959 in San Angelo, Texas and adopted by Anita Cunningham Juren and Joe Henry Juren of Midland, Texas. After living in many places as his dad was a geologist, Russell spent his middle and high school years in North Richland Hills and graduated from Richland High School in 1977. Russell attended the University of Texas in Austin and ultimately graduated from the North Central Texas Regional Police Academy. He was hired as a police officer for the City of Watauga in 1981, then the City of North Richland Hills in 1982. Russell retired as a Lieutenant in October, 2008 after over 27 years of public service. From 2008-2014, Russell served three tours as a Law Enforcement Professional in Afghanistan. One tour with the 1st Battalion, 5th Marines, and two tours with the Marine Regimental Combat Teams 1 and 2. He served as an instructor of Combat Hunter at the School of Infantry-West at Camp Pendleton in Oceanside, California. In 2016, Russell began teaching Law Enforcement, Court Systems & Practices, Forensic Science, and created the 911 Certification Class at the Birdville Center of Technology and Advanced Learning. In 1986, Russell married the former Lisa Hill at North Richland Hills United Methodist Church. They had a son, Austin in 1989, and daughter, Kathryn in 1992. They became members of St. Paul Lutheran Church in 2004. Russell had a servant’s heart and loved serving his Lord, community, family and friends. He was forever a host and loved entertaining and seizing a teaching moment. Family was so important to him; his large Cunningham family, the Hill family, his new Milner family, and his new found biological family. The light of Russell’s life was his daughter, Kathryn, who brought more joy to his world than anyone can imagine. He was thrilled with her choice of a husband in Hoby Milner. Hoby’s baseball career gave Russell even more reason to watch baseball; Hoby says Russell now has the best seats in the house. Russell also got a beautiful granddaughter out of the deal, Leighton, who he adored beyond words. Russell looked forward to her “baby smiles” everyday. Russell was preceeded in death by his infant son, Austin Juren; biological mother, Suan Goode; parents, Joe Juren and Anita Juren. He is survived by his wife, Lisa Hill Juren of 34 years; daughter, Kathryn Juren Milner and her husband Hoby Milner; granddaughter, Leighton Milner; recently found and loved biological family Roy Dossey, Cathi Dossey Sutherland, Julie Dossey Ahlquist, Chipper Dossey, Amy Dossey Erickson, Rick Dossey, Becky Lisy, Bubba Glenn, Chip Goode, Lesa Latham Netherton, Gaylynn Latham Rockwood, Lori Latham Banner, Valerie Goode Willis, Krissy Goode Mueller; and many nieces, nephews, Godchildren, treasured in-laws, extended family and friends. In lieu of flowers, the family will be starting a scholarship in Russell’s name. Donations can be made by venmo: @kathrynjurenmilner or Paypal: @kjuren. If you would like to donate and don’t have either of those, please contact Lisa or Kathryn and we will make it happen.

Russell Ted Juren, loyal husband, father, grandfather, brother, uncle and friend, was called to be with his Heavenly Father on Wednesday, May 26, 2021, a week after his 62nd birthday. Russell&#8217;s life will be celebrated on Tuesday, June... View Obituary & Service Information

The family of Russell Ted Juren created this Life Tributes page to make it easy to share your memories.

Send flowers to the Juren family.