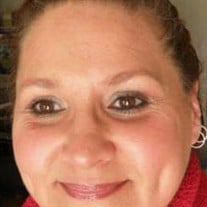 Roiette Fontonot-Mitchell affectionately known as RED, passed away on January 22, 2021. Red was a great wife and mother. She never meets a stranger, was always full of love, she brought joy wherever she went. Red was known for her big smile, hugs and most of all her cooking. Never viewed a child as a problem, she always saw the best in the youth, when she worked at the YMCA providing activities for the disadvantage youth. She was a fighter, toughest woman we knew. She’d go through hell and high water for the ones she loved. No matter the obstacles she was up against she would endure with drive, optimism, and faith. Even exhibiting these traits through recent her battle till the end. She was a go getter, a guiding light, and an inspiration for all those around her. Whether it was her family, her kids, people she met, it didn’t matter who you were she only wanted the very best for you and sought out greater in you and drove you to either meet or exceed that. Especially when it came to her family. If you asked her what her greatest achievement was, she would tell you it was being a mom, a wife and her kids. And she truly felt that way, all she wanted was to be the best mom and wife she could, to which she succeeded. Not only that but one would say her even greater achievement was with the rearing and also her over all relationship with her granddaughter Lyla Ne’ll, who she affectionately referred to as Mia Love. There wasn’t nothing she wouldn’t do for little miss Lyla. She treated her granddaughter as if she was her own child. They would spend the best of times together. Potty training, playing, going to the parks, the movies, going out on lunch dates. They were always as happy and as care free as can be always going on lavish and exciting adventures with one another. Mimi as Lyla would call her was most definitely Lyla's best friend and one of her favorite family members. In this time, I hope the memories and lessons of Mimi will carry on with Lyla over the years as she grows. RED wasn’t perfect she was only human as we know now more than ever, she had flaws. But she strived for greater, she was a God-fearing woman, and she did her best not just for herself but for her kids and family. She was both a lover and a fighter. And she sought to instill these same values into the ones she loved. Sometimes she loved and cared too much but she never did not love and care enough. Whether she was smothering you with hugs kisses and affectionate words or she was pushing you to do the right things or do better, she was always there being the best mom she knew to be. We will always be forever grateful for her presence in our lives, we will never forget the impact she left on us, and the fact that we are who we are and alive because of the sacrifices, strength, love, and support of this one great woman. She will be dearly missed. “When you know better you do better." Roiette Fontonot-Mitchell (Mom) Red is survived by Husband-Ricardo, Daughter-Lena, Sons-DeAngelo and DeAndre, Granddaughter-Lyla, Daughter-in-law’s Brittany and Yailyn. Mom-Ne'll, Sister-Roxanne and Brother-Neal Viewing will be at Lucas Funeral Home 1601 S Main Keller, TX 76248 between the hours of 5:00 & 7:00 PM

Roiette Fontonot-Mitchell affectionately known as RED, passed away on January 22, 2021. Red was a great wife and mother. She never meets a stranger, was always full of love, she brought joy wherever she went. Red was known for her big smile,... View Obituary & Service Information

The family of Roiette Fontonot-Mitchell created this Life Tributes page to make it easy to share your memories.

Send flowers to the Fontonot-Mitchell family.