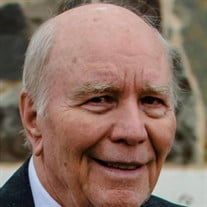 Roger Earl Casey was called home by the Lord on January 24, 2022, less than a month after his 85th birthday. He passed away peacefully at Texas Health Harris Methodist Hospital Hurst-Euless-Bedford with his loved ones holding each hand. Roger came into the world on January 3rd, 1937, in Burleson, TX, the firstborn child of BF and Inda Casey. He graduated from Brewer High School in Fort Worth. He served 8 years in the Marine Corps Reserves. Roger and his loving wife, Nelda, were married 42 years. They made their home in Bedford where they were very active church members. Roger served as a Deacon at First Baptist Church of Bedford and later at Woodland Heights Baptist Church. Roger worked in the aviation industry at Bell Helicopter and retired after 35 distinguished years. His hobbies included hunting, fishing, golfing, loving the dogs, and swimming in the pool. But his passions were his faith, his family, and baseball. If you find a picture of any of his children or grandchildren wearing a baseball uniform, keep digging and you will find a picture of “Coach Casey” in the same uniform. He coached many years of baseball in the Tri-Cities Baseball Organization. Roger touched the lives of so many young people in this way. Roger was a beloved husband, father, grandfather, and great-grandfather. He had a wonderful sense of humor, and his smile would light up a room. He will be greatly missed by all who loved and knew him. Previously departed loved ones include Roger’s father and mother, BF and Inda Casey; brother, Alton Casey; daughter, Debi Sanders. Left to carry on Roger’s memory are his loving wife, Nelda Casey; his sister, Judy Reed; his children, Pat Rehders and husband, Joe, Brenda Casey, son-in-law Royce Sanders, Sr., Kelly Yoder and husband, Ronnie, Todd Higgins and wife, Maggie; his grandchildren, Royce E. Sanders and wife Katey, Robert Sanders, Kyle Jeffcoat and wife Miuta, Blake McFarland, Colby Horne, Kyle Horne, Lauren Horne, Liam Higgins; his great-grandchildren, Micaela Sanders, Finn Jeffcoat, Quinn Jeffcoat. Visitation will be held on Thursday, January 27, 2022, at 6:00pm-8:00pm, in the chapel at Lucas Funeral Home in Hurst, TX. Funeral will also be held in the chapel at Lucas Funeral Home in Hurst on Friday, January 28, 2022, at 10:00am. Following the funeral service, a graveside service will be held at Lakeview Memorial Garden in Longview, TX at 2:00pm.

Roger Earl Casey was called home by the Lord on January 24, 2022, less than a month after his 85th birthday. He passed away peacefully at Texas Health Harris Methodist Hospital Hurst-Euless-Bedford with his loved ones holding each hand. Roger... View Obituary & Service Information

The family of Roger Earl Casey created this Life Tributes page to make it easy to share your memories.

Send flowers to the Casey family.