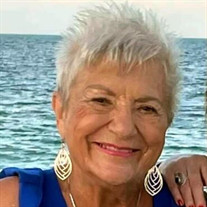 Rita Clarice Clark was a devoted mother, Grammy, Aunt, and friend to many. She was born in Port Arthur, Texas on September 3, 1941, and left this earth way too early on January 14, 2022 in North Richland Hills, Texas. Rita had just celebrated her 80th birthday. Rita is the daughter of O’Neil and Maudry Melancon. She grew up in Port Arthur, where she attended parochial school and graduated from Bishop Burn High School. She attended Lamar University for a short period of time. She moved to Fort Worth in 1971, where she spent the majority of her life. Rita married her high school sweetheart, Jerry Wayne Clark, and had two children, Kerri and Chad. She had three biological grandchildren, Alex, Darian, and Zac. She had four step-grandchildren, Darrel, Wesley, Samantha, and Nicole, and she was proud of all of them. She had 13 great-grandchildren. She had many nieces and nephews whom she loved dearly, too. Rita was fortunate to have an extended family in Fort Worth that she spent every holiday and special occasion with. Her family and friends brought her great joy. She loved big and was loved by so many. Rita was a stay-at-home mom, girl scout leader, cheer sponsor, and member of the Richland Rebels Touchdown Club. She started working later in life after her children were grown. She worked in cosmetics at Dillard's, where she formed close relationships with co-workers and her customers became her friends. She was one of the top salespeople in the cosmetic industry and won the Pacesetters award many times. Rita was an avid sports fan. She followed just about every sport but was a true Cowboys, Mavericks, and Rangers fan. She enjoyed watching sports, and especially watching those who she loved play any game. She also loved being outdoors. If you asked her where she would prefer to be, she would say the beach. Rita grew up camping with her family as a child, and she continued to teach her family to love the outdoors. Traveling and visiting new places was one of her favorite things to do, and she made so many great memories on all of her trips. Cruises were her favorite way to travel. Rita enjoyed working outside in the yard and garden and swimming in the pool. She was a true Cajun and loved gumbo, going to New Orleans, and eating seafood. Anyone who knew Rita knows she loved to dance, listen to music, and drink a good glass of wine. She definitely was one of a kind and the life of any party. Rita was preceded in death by her husband, Jerry Wayne Clark. She was also preceded in death by her parents, O’Neil and Maudry Melancon, her brother, Marc Melancon, and her sister, Neil Rae Murty. Rita is survived by her daughter, Kerri Sands of NRH, and her son, Chad Clark of Colleyville along with his wife, Rhonda. She is also survived by her grandchildren, Alex and her husband, Jose Ornelas, her granddaughter, Darian Sands, and her grandson, Zac Clark, as well as her step-grandchildren, Darrell Sands, Wesley Sands, Samantha Tollett, and Nicole Amen. She had 13 great-grandchildren that gave her pure joy. She had a host of “adopted” children and grandchildren, family, and friends who will miss her greatly. Visitation will be held at 5 pm, Wednesday, January 19, 2022 at Lucas Funeral Home with a Funeral Service to begin at 6:00 pm. Graveside Service will be held at 3 pm, Friday, January 21, 2022 at Oak Bluff Cemetery, 618 Block, Port Neches, Texas 77651.

Rita Clarice Clark was a devoted mother, Grammy, Aunt, and friend to many. She was born in Port Arthur, Texas on September 3, 1941, and left this earth way too early on January 14, 2022 in North Richland Hills, Texas. Rita had just celebrated... View Obituary & Service Information

The family of Rita Clarice Clark created this Life Tributes page to make it easy to share your memories.

Send flowers to the Clark family.