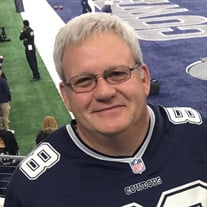 Rick was born December 2, 1961, in Fort Worth, TX to Willodeen Witt and Dottie Ray Little. He lost his battle with ALS Tuesday, March 29, 2022. Rick is absent from his body and present with our Lord now. He has received his ultimate healing and everlasting life. Anyone who knew Rick, knows he was a devoted worshiper who was the spiritual leader for his family and a member of Gateway Church, NFW. When Rick turned 12 he started his first job at Dairy Queen cutting onions with his mother. He graduated from Weatherford High School in 1980. He held several other positions over the years, but his favorite was working as a Feeder Driver with UPS. In 1983, Nicki was sitting in church, as she turned around she saw this handsome man wearing a blue suit and 3 inch platform shoes. Nicki told God that day that he was the kind of man that she wanted to marry. Rick asked her out April 1st, 1983 on their first date and asked her to marry him in October that same year. They were married April 14, 1984. Together, they were blessed with 4 children: Ryan, Logan, Kelsie, Lexie and their 2 puppies, Bella and Daisy. Rick was a devoted Husband and Dad. He was enthralled with all things Dallas Cowboys and his love for music was second to none. His passion was traveling with Nicki and their children along with friends. Cruise Ships were his favorite way of going on adventures to explore new areas. He and Nicki loved to play the roulette wheel onboard the ships. Rick loved to laugh. He enjoyed practical jokes and laughed heartily even if the joke was on him. He was loyal, honorable, kind, and the Little family’s biggest cheerleader. Rick’s passing leaves a void in the hearts of many. Rick was survived by his beloved Nicki, 4 children whom he loved dearly: Ryan, Logan, Kelsie, and Lexie. His brother Charles Smith; Sister, Linda Floyd Basey; Nephew who Rick thought of as a brother, John Wiley Floyd and wife Debbie; His nieces Shelley Smith Vorhaben, Shauna Smith Hord, Marcey Smizek and multiple other nieces and cousins. In the spirit of Rick's love for the Cowboys, please wear your Dallas Cowboy Jerseys or something Blue, Rick's favorite color. Officiating: John Wiley Floyd Closing Prayer: Charles Smith

Rick was born December 2, 1961, in Fort Worth, TX to Willodeen Witt and Dottie Ray Little. He lost his battle with ALS Tuesday, March 29, 2022. Rick is absent from his body and present with our Lord now. He has received his ultimate healing... View Obituary & Service Information

The family of Richard Allen Little created this Life Tributes page to make it easy to share your memories.

Send flowers to the Little family.