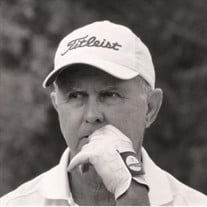 Richard Lee Craver passed away on Friday, September 10, 2021 at the age of 74. A beloved husband, father, and grandfather, Richard passed peacefully while in the presence of his family. Born in Miami, Florida as the only son of Don and Ruth Craver, Richard served in the United States Air Force during his younger years. Following his service, he began a career with Delta Airlines that would extend 30 years and eventually lead to a move from Miami to Dallas/Ft. Worth. Delta would also serve as the source of introduction to his wife, Chris, who also worked for the airline and with whom he recently celebrated their 47th wedding anniversary. A family man, Richard enjoyed engaging in the activities of his son, Brian, and eventually his grandsons, Cole and Cason. He found great joy in pursuing his passion for golf, but was equally happy while supporting the passions of his family, whether it be Brian’s golf outings or Cole and Cason’s baseball games. Richard lived a life that matched his temperament, one that was quiet and gentle. He enjoyed the friendships in his midst and was always appreciative of life’s simple pleasures, such as a well-timed joke or an exceptional golf shot. His words were few, but his life communicated love and support for those close to him. His kindness for his family and friends was appreciated and will be missed. Richard is preceded in death by his mother and father, Ruth and Don Craver. He is survived by: his wife, Chris Craver; his son and daughter in-law, Brian and Elise Craver; his grandsons, Cole and Cason Craver; his brother in-laws, Jim Sperrazza and Tony Sperrazza; and many nieces and nephews whom he loved. A Celebration of Life will take place at Good Shepherd Catholic Community (1000 Tinker Rd, Colleyville, TX) on Friday September 17th at 11:00 am. A light lunch will follow. A private burial will take place at Dallas-Fort Worth National Cemetery at a later date. To honor his love for the game, feel free to wear your favorite golf shirt to his memorial. In lieu of flowers, the family asks donations go to the Adenoid Cystic Carcinoma Research Foundation (ACCRF.ORG) or Union Gospel Mission, Ft Worth, TX

Richard Lee Craver passed away on Friday, September 10, 2021 at the age of 74. A beloved husband, father, and grandfather, Richard passed peacefully while in the presence of his family. Born in Miami, Florida as the only son of Don and Ruth... View Obituary & Service Information

The family of Richard Lee Craver created this Life Tributes page to make it easy to share your memories.

Send flowers to the Craver family.