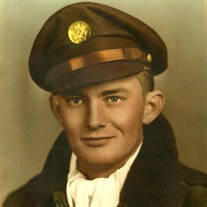 Reverend C.A. Mangham, 97, of Cranfills Gap, Texas, passed away Friday, April 2, 2021. He was born in Dalby Springs, Texas on September 21, 1923 to the late Margaret Sarah (Chamness) Mangham and Cleveland Adlai Mangham, Sr. Rev. Mangham was a patriot and enlisted in the United States Air Force, serving during World War II. He was a minister for United Methodist Church and served at 18 different United Methodist Church locations. Rev. Mangham was part of the United Methodist Church Conference in Texas for over 30 years. He also served for the Ecumenical Church for 10 years. He had a passion for quail hunting, fishing, and loved the mountains of Colorado and Red River, New Mexico. He is preceded in death by his parents; wife, Gloria Mangham; brothers, Neal Mangham and Charles Mangham; sisters, Gladys Mangham, Edith Mangham, and Jean Durante; grandson, Travis Ash. He is survived by his sons, Cleveland Adlai “Buster” Mangham, III and wife Donna, and Eddie D. Mangham; daughter, Debbie Stanford and husband Terry, and daughter-in-law, Regina Jacobs; 10 grandchildren; 16 great-grandchildren; 14 great-great grandchildren; and a host of nieces, nephews, and other relatives. The family will receive visitors and friends at Lucas Funeral Home in Hurst, Texas, on Friday, April 9, 2021 from 6:00 P.M to 8:00 P.M. Funeral services will begin at 11:00 AM on Saturday, April 10, 2021 at Cranfills Gap United Methodist Church in Cranfills Gap, Texas with Rev. Cynthia Lee officiating. Committal and interment service with Air Force honors will take place at 11:00 AM on Monday, April 12, 2021 at Walton Cemetery in Carthage, Texas. In lieu of flowers, the family asks that donations be made to the Alzheimer’s Association.

The family of Rev. C.A. Mangham created this Life Tributes page to make it easy to share your memories.

Send flowers to the Mangham family.