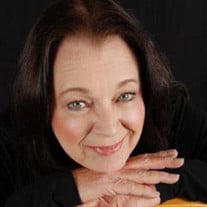 Rebecca “Becky” Susan Swift Williams, 68, of Bedford, Texas, passed this world on Saturday, February 19th 2022. Becky was born on March 7, 1953 in Dallas, TX to Major James “Jim” Edward Swift (1919 -2010) of Bon Secour Alabama, and Gladys “Sally” Mae Allen Swift (1922-1991) of Welch, West Virginia. Becky graduated from Thomas Jefferson High School in Dallas, Texas in 1971. When speaking about her life after high school, Becky talked fondly about a Pontiac Firebird she owned, and frequent road trips taken across the gulf coast states. She spent most of her career working for the Wall Street Journal, first as a teletypist and later as an office manager at the Dallas Bureau until her retirement. A highlight of Becky’s career was teletyping during several Republican National Conventions including in 1976 in Kansas City, 1980 in Detroit, and 1984 in Dallas. Becky was proud of her proficiency as a teletypist and that very few errors in typing made it to print. Becky met her husband of 25 years Tommy “Tom” Carl Williams (1949-2006) from Slaton, TX in 1981 at a country and western bar in Dallas, Texas. They resided in Bedford, TX, and had two children together, Justin Travis Williams B. 1982 of Olympia, WA, and Jessica Leigh Williams Holloway B. 1984 of Bedford, TX. During their time together they enjoyed spending time with their family and annual trips camping. After the heartbreaking 2006 passing of Tom due to a lengthy cancer battle, Becky met her significant other of 12 years Roy Rice of Colleyville, TX in 2010. Roy and Becky bonded over shared interests, personal hobbies, and enjoyed spending time together until Becky’s passing. Becky enjoyed many hobbies over her lifetime including caring for West Highland White Terriers and Yorkies, dancing, tole craft painting, cooking, baking, decorative cake making, gardening, and hatching and repopulating Monarch Butterflies. Becky was preceded in death by her parents Jim and Sally, husband Tom, and many beloved Westies and Yorkies including Duke, Muffy, Jenkins, Tinker, Cookie, Spider, and Higgins. Becky is survived by her significant other of 12 years Roy Rice; Son: Justin Travis and Jennifer Dillon Williams of Olympia, WA; Daughter: Jessica Holloway and Adam Holloway, grandchildren Avery and Brody of Bedford, TX; Sister Sandra “Sandy” Perlstein of McKinney, TX; Brother James “Jimmy” Edward Swift Jr. of Dallas, TX, Nephew Paul Pedler of Denver, Colorado; Stepdaughter Jennifer Williams Viggato of Lewisville, TX; Beloved Dogs Gizmo, Dixie, Bonnie and Baxter. Visitation for Becky will be held on Saturday February 26, 2022 at Lucas Funeral Home in Hurst, Texas, with cremains interred at a later date, at Parker Memorial Cemetery in Grapevine, TX, with family, friends, and beloved pets. In lieu of flowers, the family requests donations be made in Becky’s honor to local non-profit dog rescues, and specifically towards the conservation of Eastern Monarch Butterflies. Becky was a strong proponent of animals and insect pollinators and encouraged others to plant milkweed seeds in their yards where appropriate. Becky further advocated the avoidance of pesticides, or purchasing commercially available plants treated with pesticides, in order to promote the repopulation and conservation of vital insect pollinators. plantmilkweed.com donate.monarchjointventure.org

The family of Rebecca Swift Williams created this Life Tributes page to make it easy to share your memories.

Send flowers to the Williams family.