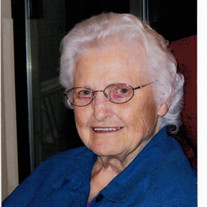 Rebecca Ann Brickell born March 11, 1922 in Dallas County, Texas, went to be with her Lord and Savior, Jesus Christ on Tuesday, April 13, 2021. She loved her family with all her heart, she called them her little chickens. She had 5 grandchildren,... View Obituary & Service Information

The family of Rebecca Ann Brickell created this Life Tributes page to make it easy to share your memories.