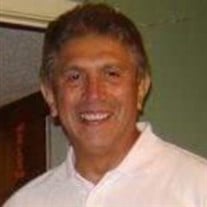 Raymond Ramos Rios, age 74, of Argyle Texas passed away Sunday, on January 30, 2022 due to unexpected complications from COVID. He is lovingly remembered by those who knew him, as a wonderful husband, father, Papaw, friend, colleague and US Marine. Raymond was born to Esquio and Modesta Rios, in Dallas Texas on October 27th, 1947. He grew up in Dallas, along with his siblings, Jesse,Robert, Janie and Helen. Born after the passing of his eldest brothers Augustine and Raymond, Ray was the youngest of all his siblings, and as such always held a deep sense of family and duty. After graduating in 1966 from North Dallas High School. Raymond joined the Marine Corps and proudly served from September 1966 - October 1969. Deploying to Vietnam and earning two purple hearts, for injuries sustained in battle, as well as 2 Presidential Citations for "extraordinary heroism and outstanding performance of duty in action against enemy forces" Raymond was a Marine through and through. He lived by the adage of "Once a Marine, always a Marine" and would proudly correct anyone who referred to him as a "former" Marine. Once Ray left the military, he began his long, and fulfilling career in Loss Prevention that spanned over 50 years. He used his vast knowledge to propel his career with companies such as Sanger Harris, Shepler's and Handy Dan, as well as major trucking companies Saia Motor Freight and DHL Supply Chain. His love for his job was apparent to anyone who knew him. He had a passion for his work that drove him to be the best in his career. Raymond was a proud family man, who loved his wife, 2 daughters, and 6 grandchildren immensely. When his daughters were younger, they could often be found as a family at the Dallas Zoo, Science Place, Sea World, ice skating, or rollerblading. Often taking trips together during the summers, Raymond was happiest when everyone was together sharing experiences. Raymond was very proud of the accomplishments of his family which include daughter Elinia's graduation from the Makeup School in Hawaii to her career as a makeup artist for Film and Television; and his daughter, Lyndsey’s graduation from TCU with dual degrees in Spanish and Sociology followed by her successful career at Saia Motor Freight. Raymond’s love of firearms and being outside helped guide him to the Dallas Gun Club, where he served as president for several terms. He had a love for golf and outdoor photography that he shared with his wife, Joni, often traveling and taking road trips to capture images which hang in their home. Raymond and Joni met in March of 1989 and dated for 7 years before taking the leap into marriage on July 27, 1996. They grew together in their love of dancing, traveling, photography and visiting wineries in a relationship that spanned 32 years, she did not, however, share his love of cigars. Raymond is survived by his wife of 25 years, Joni Rios. His daughter Elinia Eads and her partner Eric Marsh, and their children Aryn, Norryn, and Jari; his daughter Lyndsey Hill and her husband Corey Hill, their children Haley, Logan, and Abigail. He is also survived by his loving extended family which includes in-laws Fred and Ruby Held, brother-in-law Fred and wife Lina Held, as well as niece and nephew Fred and Demi Held, and many cousins. He was an amazing man, who lived an extraordinary life, and will be greatly missed. The visitation will be held Sunday, February 6th from 2 to 4pm at Lucas Funeral Home located at 1601 S Main Street, Keller TX 76248 with the service on Monday, February 7th at 2pm also at Lucas Funeral Home. Burial will take place on Monday, February 14th at 2pm at the DFW National Cemetery located at 2000 Mountain Creek Parkway, Dallas TX 75211. In lieu of flowers, donations may be made in Ray's memory to the National Vietnam War Museum 12685 Mineral Wells Hwy., Weatherford, Tx 76088.

Raymond Ramos Rios, age 74, of Argyle Texas passed away Sunday, on January 30, 2022 due to unexpected complications from COVID. He is lovingly remembered by those who knew him, as a wonderful husband, father, Papaw, friend, colleague and US... View Obituary & Service Information

The family of Raymond Ramos Rios created this Life Tributes page to make it easy to share your memories.

Send flowers to the Rios family.