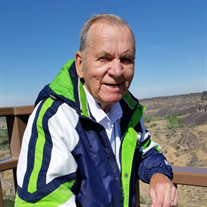 Raymond (Ray) Trygve Johnson, age 84, of Hurst, Texas, slipped the bonds of this earth for Heaven on Monday, March 22, 2021, due to natural causes. His wife, Michele, was at his side when he died. Ray was born in Duluth, Minnesota on January 31, 1937, to Carrie and Trygve Johnson. The family moved from Minnesota to Renton, Washington towards the end of World War II. Ray loved Washington State and was proud to call it home. Ray was proud to have served in the Marine Corps as enlisted for 3 years and reservist for 3 years with an honorable discharge as Sergeant. He was also a member of the Navy ROTC during high school prior to joining the Marine Corps. Ray was an avid pool player – playing in competitive leagues with one of his sons, bowler on leagues with his brother, Ted, outdoor camper and, for a short time, flying large radio model airplanes. One of his favorite airplanes was the P-51 Mustang. One of his greatest joys in life was driving. He drove transit bus for Golden Gate Transit for 20 years, then after retirement, he became a long-haul truck driver for 18 months and followed that with various jobs in the Seattle, Washington area as a CDL truck driver. Ray was also an avid motorcycle rider and one of his first dates with Michele was a wonderful ride through the Washington State forest where Ray had camped quite often as a child. Ray could drink coffee at all hours of the day and still sleep like a baby at night. He loved his coffee; a pot was always at the ready. He and Michele sold their home of 18 years and moved from Duvall to the Tri-Cities in Washington State in July 2017. They would take hours long drives in Eastern Washington. These drives hold some of their best memories together. They moved to Hurst, Texas, in September 2018 to be closer to family. Ray leaves behind his beloved wife and soulmate of 26 years, Michele. They met in April of 1995 and were married on September 18, 1999. Ray is survived by several children, stepchildren, grandchildren, great grandchildren, loving in-laws, nieces, nephews, brothers, and a sister. Ray will be buried at the Dallas-Fort Worth National Cemetery on Friday, April 2, at 11:00 a.m. in a military ceremony. In lieu of flowers, please consider a donation to the American Stroke Associate at www. stroke.org or American Heart Association at www.heart.org.

Raymond (Ray) Trygve Johnson, age 84, of Hurst, Texas, slipped the bonds of this earth for Heaven on Monday, March 22, 2021, due to natural causes. His wife, Michele, was at his side when he died. Ray was born in Duluth, Minnesota on January... View Obituary & Service Information

The family of Raymond Trygve Johnson created this Life Tributes page to make it easy to share your memories.