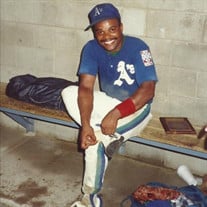 Randall “Randy” Lamonte Thorpe was born May 24, 1959 in Durham, North Carolina to Bobby Thorpe and Frances Lee (Tilley) Thorpe. Moving to Brooklyn, New York shortly after his birth, Randy was diagnosed with cancer by the age of one, not fully recovering until the age of eight. The ultimate fighter and survivor, Randy credited his full recovery to the dedicated love and care of his mother and emerged a highly gifted and talented athlete who would eventually become a Legend in New York City and beyond. His early athletic skills were honed during his summers spent fondly in Durham at the Boys Club and playing with his older brother and friends in the park in their Crown Heights, Brooklyn neighborhood. A quadruple threat, Randy ran track and played basketball at John J. Reynolds Junior High School, where he was named Athlete of the Year. He went on to play football and baseball at Abraham Lincoln High School. Playing organized baseball for the first time in the 11th grade, Randy went on to win a city championship, played in Yankee Stadium. As an elite high school athlete and fierce competitor, Randy amassed numerous awards and accolades for his athletic talents. Among them were: New York Daily News Brooklyn 44 (Best Players) for football (1976), All-City in football (1976), and All-City in Baseball (1977). Randy was highly recruited for both football and baseball, originally signing to attend Indiana University on a football scholarship. Ultimately he chose to attend the University of Texas at Arlington (UTA) on a baseball scholarship, which became his passion. At UTA, Randy continued his stellar athletic career, where he lettered in baseball all four years from 1978-1981. He earned 24 school records, including career triples, walks, and runs scored. He was most known for his speed and leadership earning records for the two best seasons in stolen bases and career stolen bases. Favoring the centerfield position, Randy was also a two-time member of the All-Southland Conference First Team. He was drafted in the 22nd round by the Texas Rangers in 1981 and inducted into the UTA Hall of Honor in 1996. Following several seasons with the Rangers, Randy returned to the Dallas /Ft. Worth area, where he began working with Texas Power & Light (now Oncor) and he remained there for 38 years. In 1984, he married his college sweetheart, Danette, and they started their family. Randy became a staple on the Texas baseball scene, first playing with the Dallas Athletics (A’s) and helped lead them to three World Championship Titles. His greatest legacy was passing on his love for baseball in his 22 years of coaching teams including the Texas Warriors, Heat, Dallas Tigers, Dallas Dodgers, and Texas Stix. He was known for his tenacity, drive, and bringing out the best in all of his players. Though he remained in Texas, Randy was always a proud New Yorker and an avid Giants and Yankees fan. He also loved vacationing, being out in nature, and enjoyed documentaries, especially Black History, nature, and geography. More than anything, he loved spending time with his family and listed his kids as one of his greatest accomplishments. On February 15, 2021, he was reunited in eternity with his parents and his brothers Andre and Roderick. He is survived by his wife of 37 years, Danette, daughters Tonjia Simmone and Elise, and son Randall II, grandchildren Benjamin and Anna Caroline, brothers Bobby, Chris, Larry and Kenny, sister Joiee, and a host of uncles, aunts, cousins, nephews, nieces, and other extended family who will always hold him dearly in their hearts. Live-streaming of Saturday’s private family service can be found at https://www.facebook.com/GCMBCWORSHIP or Greater Community Missionary Baptist Church Arlington, TX YouTube page @ 12 p.m. In lieu of flowers, please donate to UTA baseball program, in honor of Randy Thorpe. You can donate by visiting: www.give.uta.edu/baseball

Randall &#8220;Randy&#8221; Lamonte Thorpe was born May 24, 1959 in Durham, North Carolina to Bobby Thorpe and Frances Lee (Tilley) Thorpe. Moving to Brooklyn, New York shortly after his birth, Randy was diagnosed with cancer by the age of... View Obituary & Service Information

The family of Randall Thorpe created this Life Tributes page to make it easy to share your memories.

Send flowers to the Thorpe family.