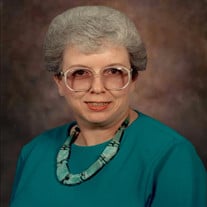 Penny Padgett Hammack passed away at the age of 81 on Sunday, May 30th, 2021, at her home in North Richland Hills, Texas. Penny joins her husband Kenneth, her mother, Billie, grandmother, Sybil, and aunt, Ena. She is survived by her sister Martha Henry, her daughter, Briana Kew, her son and daughter-in-law, Mark and Carol, as well as many cousins, nieces, and nephews. Penny was born in Fort Worth, Texas on August 31st, 1939, to Billie and Jack Padgett. She attended Arlington Heights High School in Fort Worth and graduated in 1957. Shortly after graduation, she married Kenneth Ray Hammack. She attended TCU for a year before starting to work full time to help Ken through college. She and Ken attended Gideon Baptist Church in Fort Worth where they made many friends. In 1966, Penny took a job at American Airlines in the Southern Reservation Office at Great Southwest Airport in Fort Worth. While at American, she worked in multiple areas of the reservation office ultimately ending up in International where she got to interact with people from all over the world. After graduating with a Bachelor of Business Administration in Accounting in 1988, Penny transferred from Reservations to the Accounting Department. She quickly moved into the International Division and became one of the lead accountants. Penny remained in the International Accounting department until her retirement in 1996. However, she could not remain still or leave the airline family so she then took a job with Simmons Airlines, one of the American Eagle family of companies until her “full” retirement at the end of 1997. Again, she was on the international stage as Simmons covered not only the southeast United States, but also the Caribbean. Penny enjoyed travel. She and Ken visited many countries during her time with American including England, Ireland, Germany, Mexico, China, and Japan. She also enjoyed travelling the United States visiting both coasts including New England, New York, Washington D.C., San Francisco, and Los Angeles. She enjoyed culture and encouraged Briana and Mark to visit museums. She particularly liked the Smithsonian in Washington D.C. and the Metropolitan Museum of Modern Art in New York City. Penny was also an avid reader. She particularly liked Dorothy Dunnett and Dorothy Sayers. Especially after her retirement, she would read two to three books a week. With the introduction of the Kindle, she would get to the point of reading a book a day. Penny also loved cats! From early on, there would be at least one cat in her home, usually two and sometimes three. She spent time almost every day watching kitten videos on YouTube, Facebook, or other websites dedicated to cats. She also collected kitten pictures from around the internet. Tilly (Attila the hungry), Trouble, Tramp, Tripper, Trinket, and Frankie were just a few of the cats she adopted over the years. Donations to animal rescue and adoption centers are greatly appreciated. This matters to mom a great deal. “To laugh often and much; to win the respect of the intelligent people and the affection of children; to earn the appreciation of honest critics and endure the betrayal of false friends; to appreciate beauty; to find the beauty in others; to leave the world a bit better whether by a healthy child, a garden patch, or a redeemed social condition; to know that one life has breathed easier because you lived here. This is to have succeeded.” – Ralph Waldo Emerson

Penny Padgett Hammack passed away at the age of 81 on Sunday, May 30th, 2021, at her home in North Richland Hills, Texas. Penny joins her husband Kenneth, her mother, Billie, grandmother, Sybil, and aunt, Ena. She is survived by her sister... View Obituary & Service Information

The family of Penny Lou Hammack created this Life Tributes page to make it easy to share your memories.

Penny Padgett Hammack passed away at the age of 81 on Sunday,...

Send flowers to the Hammack family.