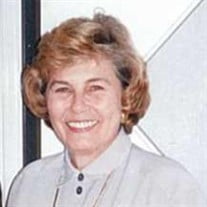 Psalm 61:2 From the end of the earth I will cry to You, When my heart is overwhelmed; Lead me to the rock that is higher than I. Peggy Lea McDonald passed away peacefully surrounded by family on January 7, 2022. She was born on July 19, 1939, in Christiansburg Virginia. Peggy is survived by her husband, James Edward McDonald, daughter Laura Lea Huestis, sister Helen Denise Myers, brothers Alton Crosby Myers and Stuart Ronald Myers, grandsons David and James Reck and other relatives and beloved friends especially Tami Tanaka who was welcomed into the family and served as a sister to Laura and Daughter to Peggy. She was preceded in death by her mother and father, Mildred and Stuart, and her son, John. In a Methodist ceremony officiated by Pastor Donald A. Papp, Peggy Lea Layman and James Edward McDonald entered into holy matrimony on March 12, 1970, in Santa Ana California with Lola Sprick and James Grow as witnesses. In Virginia as a young girl, in addition to earning the title of “Miss Christiansburg” in 1957, “Peg” was a gifted horse rider, trainer, and exhibitor – her equestrian experience undoubtably led her to become a life-long lover of animals. They loved her, too – one of her favorite stories was of her experience with a family of foxes who took up residence in the back yard in Trophy Club Texas. Momma fox showed up one day and became friendlier and friendlier as Peg put water out for her. One day, some strange noises came from under the deck. Kits! Momma got a few extras from that time on. Bunnies were a favorite, too. As she grew up, Peggy began to collect bunnies. Bunny toys, bunny lamps, bunny figurines, bunny pins, bunny dishes, bunny art, bunny slippers. Anything bunny, Peg treasured it. Another collecting hobby surfaced later in her life. Snuff bottles from all over the country and the world began to be acquired, researched, cataloged, and put in elaborate displays, all carefully and lovingly cherished by Peg. The collection may be among the most comprehensive and interesting that exist. Her grandsons were always most interested in the cookies, but Peg loved her cookie jars, all dozens of them, ranging from a bunny (of course!) to an Airstream trailer, to a Scotty dog, to a Santa on horseback! Peg loved Christmas – her attic is filled with box after box of collectable ornaments, decorations, trees, and Santas, Santas, and more Santas! Peggy was employed as a fine jewelry retail manager during her professional career but spent most of her time as a stay-at-home mom for Laura and her beloved dogs Dondi and McGillicuddy the Dachshunds and later, the family’s Akitas, “Kuma” and “Taka”, then more recently, the frisky felines “Howler” and “Squeeky”. Peggy and “Jim” moved to Okinawa after the wedding, where Major McDonald piloted RC135 aerial reconnaissance aircraft for 5 years while Peg ran the show at home, which included the kid from the neighborhood who became her “other” daughter and a sister to Laura. Tami sure livened up the place, and wherever she goes, she still does. After Okinawa, the family moved to Bellevue, Nebraska, where Jim flew KC135 “tankers” out of Offutt Air Force Base while Taka terrorized the new neighborhood and Laura got speeding tickets in her Firebird. Through challenges like these (and more!), Peg was the rock of the family, especially for her Sister Denise. Even during her last days, confined to a wheelchair and fighting to recover from her stroke, Denise would often say that “Peg is my rock”. Especially after the move to Texas, and even with such a full life and her numerous pursuits and hobbies, Peggy needed a little “Peggy Time” occasionally. She became a prolific slot player and made friends all over the country at her favorite places, the Silver Legacy in Reno and Harrah’s (all locations!). If there was a big money tournament Peg was either there or wishing she was. A celebration of life will be held on Sunday, January 16, at 1:00 p.m. at Lucas Funeral Home, 700 W. Wall St. Grapevine, TX. The officiant will be Rev. Marc Lowrance. Interment will be on Monday, January 17 at 1:00 p.m. at Dallas-Fort Worth National Cemetery, 2000 Mountain Creek Pkwy, Dallas, TX. Pallbearers will be David and James Reck and Peter Huestis. Honorary pallbearers will be Mike Reese, Pete Flores, and Chris Schmit. The family requests that memorials be sent in her name to the American Stroke Association and would like to thank the many health care providers, especially the staff at Grapevine Medical Lodge for their care during the challenges that Peg experienced during her last years. I hold it true, whate'er befall; I feel it, when I sorrow most; 'Tis better to have loved and lost Than never to have loved at all. -- Alfred Lord Tennyson

Psalm 61:2 From the end of the earth I will cry to You, When my heart is overwhelmed; Lead me to the rock that is higher than I. Peggy Lea McDonald passed away peacefully surrounded by family on January 7, 2022. She was born on July 19, 1939,... View Obituary & Service Information

Send flowers to the McDonald family.