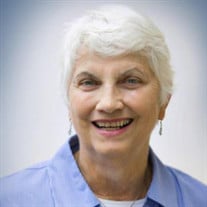 Born on July 22, 1941 in the community of Columbia, Tennessee to Don and Lou Richardson, Paula Hope Richardson lived a life full of faith, accomplishment and rugrats. Paula’s final day with her family was April 6th in her adopted hometown of the past 37 years, Ft. Worth, Texas. Her early childhood days in Columbia began with her mother waking her up, singing “Oh, what a beautiful morning/Oh what a beautiful day”. She was the eldest child of three with her younger brothers Ralph and Keith following. Her bedroom window overlooked the Duck River. She graduated from Columbia High School as class Salutatorian in 1959. She went on to attend the University of Tennessee in Knoxville where she graduated in 1963. She was the second woman ever to earn a BS in Civil Engineering at UT. Among her many achievements, the university awarded her its highest student honor as a Torchbearer. She was a lifelong Tennessee Volunteer and followed their athletic teams with spirited devotion, especially the Lady Volunteers under Coach Pat Summit. Being a volunteer was more than just a label to her. Paula spent a lifetime in devotion to God as a member of various Churches of Christ in every city and town she lived in. Given her vigorous and active faith, the spirit of philanthropy was second nature to her. She volunteered to serve in multiple religious based organizations as well as those involving her children. There simply is not enough room to list all the charitable and altruistic activities in a life that oftentimes was devoted to others. While at school in Knoxville, she met Lamar Ball whom she married and started a family that eventually produced five children over a span of 16 years: David, Shannon, Jason, Allison, and Meredith. It is believed that sometime during that span that Paula began her lifelong and enduring relationship with Dr. Pepper. She and Lamar moved to Marietta, Georgia following graduation. Paula was employed by Lockheed Georgia as an aircraft engineer and technical writer and editor. She spent many days in blue jeans crawling around the interior of the C-140 and C-5A cargo aircraft. She had to have Secret Service Clearance in order to write technical instructions for electrical and mechanical avionic components for technical manuals. In 1999, Paula achieved the most exalted title of her life: Nana. She was the grandmother to 13 grandkids that were born from 1999 to 2020. Paula is survived by her children: David Ball and Hannah Marthaler of Chicago, Shannon Ball of Denver, Jason and Sabrina Ball of Ft. Worth, Allison and Luke Bertorelli of Ft. Worth, and Meredith Martin of Heath, Texas. Her grandchildren: Nathan, Kaylan, Olan, Lulu, Alexandra, Olivia, Wyatt, Ian, Tommy, Lilah, Charlie, Juliana, and Conor. Her siblings: Ralph and Kay Richardson of Memphis, and Keith Richardson of Knoxville. Her nieces and nephews: Vivian and John Bossong of Murfreesboro, TN., and Ryan and Beth Richardson of Hernando, MS. Funeral service will be conducted on April 24th at 2pm at Oakes and Nichols Funeral Home, 320 W. 7th St., Columbia, TN. In lieu of flowers those that wish to make a memorial please send to the Susan G. Komen Foundation of Dallas, Texas.

Born on July 22, 1941 in the community of Columbia, Tennessee to Don and Lou Richardson, Paula Hope Richardson lived a life full of faith, accomplishment and rugrats. Paula&#8217;s final day with her family was April 6th in her adopted hometown... View Obituary & Service Information

The family of Paula Richardson Ball created this Life Tributes page to make it easy to share your memories.

Send flowers to the Ball family.